The Music of Ritmo Oriental - Instrumentation and Orchestration

It's easy for arrangers to come up with creative variations for rhythm section parts which have a natural call and response built into their structures, but in the case of the bass, piano, and string parts in songo, charanga, salsa and timba, all three parts follow the same fairly rigid rules of construction: they all resolve heavily on the downbeat of the 2-side, they all have about the same number of notes, and they all follow the same general roadmap of clave-aligned upbeats and offbeats. In this case, a lack of rhythmic counterpoint is built into the traditional parts, and thus, it's quite a trick to avoid being redundant. When you're studying the bass, or trying to invent a bass tumbao, there's a tendency to focus in on that one part, but to hear it from an arranger's point of view, try stepping back and giving equal attention to the bass and string section -- and the piano if you can hear it in la Ritmo's mixes. 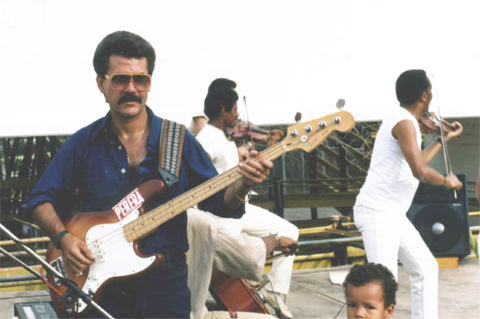 Humberto Perera with RO's string section of cello and 3 violins

In terms of instrumentation, Ritmo Oriental is very much a pure charanga in the tradition of the early danzón orquestas, Arcaño, and Aragón: bass, piano, flute, and a miniature chamber orchestra of cello and several violins. RO's string players play with exquisite tone and intonation -- something which is made much more difficult by the elaborate dance moves which were the original inspiration for the espectáculos later made so famous by David Calzado with Charanga Habanera.

String and piano parts will be covered in other sections of this book, but for now, let's just take a quick look at how the guajeos of Se perdió are cleverly constructed to lock in rhythmically with the bass tumbao. As the energy level of the arrangement rises and falls, the strings rotate between three rhythm patterns, each of which fills not only the large space at the end of the bass tumbao, but also the first backbeat.:

After this, we'll avoid the temptation to analyze every string guajeo in a section devoted to bass tumbaos, but as you study each bass part, make sure to listen to how it interacts with strings, and the piano if you can hear it! Just as the congas and güiro tend to be overmixed relative to the drums, the strings tend to dominate the piano in Ritmo Oriental's mixes.

When we get to timba, we'll find that the role of the string guajeo has been largely unsurped by the new breed of incredibly inventive piano tumbaos, but the 80s witnessed a major renaissance of great string writing at the hands of La Ritmo, Van Van, Maravilla de Florida, Orquesta Típica Juventud, Aliamén and many others. Of the timba arrangers who do still use strings, Formell is still going strong, but perhaps cleverest is Manolito Simonet.

note: The slower MIDI file gets progressively slower to highlight the subtle interactions between the 3 parts.

notes: This bass tumbao is rhythmically identical to the previous one, Se perdió el amor, except that it adds the final two offbeats, which serve as pickups to the downbeat and changes the feel significantly. The tempo ranges from about 83 to 89 bpm - normal for salsa and timba, but unusually slow for the songo era. As with most of these early Ritmo Oriental arrangements, gear change effects involves removing the piano and strings, but not the bass.

What Year Was It Again?

Mi socio Manolo, Se perdió el amor, and Canto a la felicidad were all recorded for the CA-718 session - probably in 1972 - but the recordings are lost. What we've been listening to are 1974 recordings from the compilation CD La historia de la Ritmo, Vol. 1 which contains RO's 1974 LP and their 1975 LP, minus the boleros. Got that? Now, the next three songs from the mysterious CA-718 session were all boleros, and I've yet to find anyone who has them or has heard them. This brings us to track 7, Y se baila así, and the recording we'll be hearing is from 1975.

It's amazing to note how many of these songs are written by the güiro player! In the rare field of percussionist/songwriters, it's hard to think of anyone other than Giraldo Piloto who's written more songs than Enrique Lazaga and and Y se baila así is one of his best -- it's packed with the kind of magical little moments that great tracks are made of.