(look for a timba.com interview with JC Maza soon)

Maza also contributed brilliant arrangements to many of the songs that he himself didn't write, such as Por hacerme caso, Un matrimonio feliz, and the masterpiece we're about hear - La Ritmo suena a Areíto. This one, mercifully, is one of only three from this album to make it onto a compilation CD. 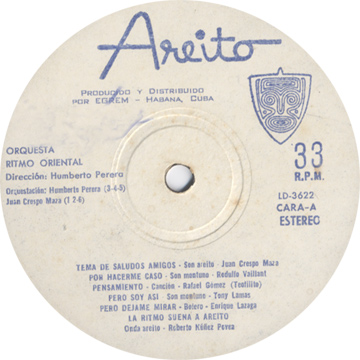 If the reader is willing to humor me, I'd like to try a very simple experiment:

Before looking at any of the notation examples below, listen the opening of the track several times and answer two questions:

1) Does the rhythmic placement of the phrase "con la nueva onda Areíto" throw you off?

In my case, the answers were "yes" and "it's my favorite Ritmo Oriental track so far", and I suspect that these two answers are related. My theory is that when a passage can be heard several ways, it becomes more interesting with repeated listenings. For example, here's a list of Charanga Habanera songs which I initially found very difficult to learn to hear correctly, but which rank among my favorite Cuban arrangements:

The opening rap of La Ritmo suena Areíto leaves no doubt whatsoever where "1" is, but when I first heard the melodic coro that answers that rap, it seemed to come in a beat early. As you can see from the notation below, however, it all fits nicely in 4/4. In order to hear it correctly, you have to hear "onda" as the downbeat instead of hearing (as I did) "la" as the pickup. To train myself to hear it, I used the "TwistaLoop" function of Emulator X to make this training file which establish onda as the downbeat and then gradually adds the rest of the phrase in looped form.

Now, why is this phrase so likely to throw listeners off? I've found that in almost every case, it's the harmony, not the syncopation, that plays tricks on our ears. The song starts out with a typical funk groove in the key of A, but modulates to Bmi on beat 4. The chords that follow it seem to reinforce the false impression that Bmi is the beginning of a new measure:

Now that we know where "1" is, we can fully appreciate JC Maza's arrangement and Humberto Perera's glorious bass part. 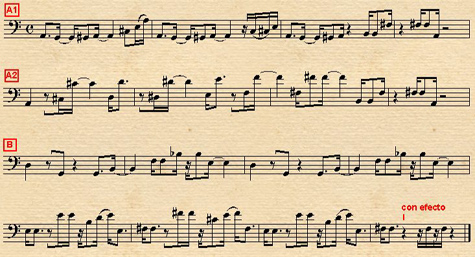 The opening phrase we've been discussing (A1) is repeated (A2), but this time the bass, playing in funk-influenced octaves, moves up the chromatic scale every beat and a half, culminating in the same brief modulation from A to B minor. The B section's bassline -- also very strange and funky in both its rhythm and harmony -- modulates between D and Bmi.

The whole cuerpo repeats, with a few nice variations in the bass, and then the upward chromatic bassline returns for a third time, but as the rap becomes more urgent, the bass starts ascending more quickly, changing notes every beat instead of every beat and a half, until the passage explodes climactically into F# minor for the first coro: 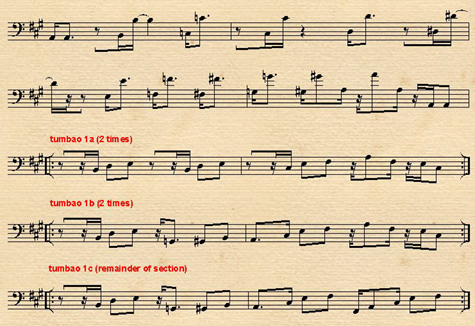 Now let's look at the 3 tumbaos relative to the clave:

Just as Humberto's chromatic octave run provided an explosive launching pad for tumbao 1, the second main tumbao is introduced by a furious set of bloques:

Or, if you prefer notation:

For tumbao 2 Humberto creates the effect of a pedal tone (E) while still managing to outline the chord progression (E - F#mi). The MIDI example is just the basic part - in practice, he varies it almost every time.

The brilliant idea of two different coro sections answering each other was later adopted by Charanga Habanera in many arrangements and perhaps most famously by Paulito FG in De la Habana.

La Ritmo suena a Areíto is a masterful arrangement. Every section and every idea is bubbling over with inspiration - from the opening notes to the fade out a capella ending.