notes: As would become standard practice in the best timba of the 90s, each additional coro gets its own interesting new tumbao.

Que crezca la mujer, (a rare example of feminism in Cuban lyrics!), has a cuerpo that's as imaginative and perfectly executed as Yo bailo de todo, and well worth transcribing and studying. Frankly, from this point on, every track Humberto Perera recorded could be used as a textbook example of perfection in Cuban bass playing. He'd be a very worthy subject of a book similar to the James Jamerson masterpiece discussed above.

notes: The transcription is just a basic template. Humberto plays dozens of variations. Although the tumbao for the montuno section, unlike the cuerpo, has almost no R&B flavor, this bass performance very much recalls the aesthetic approach of James Jamerson -- creating endless melodic improvisations around a basic idea without ever sacrificing the groove or conflicting with the other parts. To demonstrate, listen to this bizarre computer-altered version. The tempo is slowed down, but the pitch raised an octave. Then the high frequencies are rolled off dramatically to attenuate the annoying "chipmunk" effect in the voices. Once you get used to the odd geeky sound of the track (some people never do!), you can hear the bassline in all its melodic splendor. 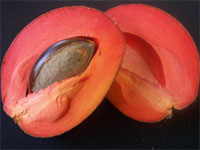 La chica mamey, like Yo bailo de todo, is on the short list of Ritmo Oriental's most famous tracks and has been quoted by many timba bands, including La Charanga Forever in this excerpt from Sueño equivocado (source). Mamey is a wondrous tropical fruit that Gabriel from Yemayá's Verse tells us is famously consumed in the form of a milkshake called batido de mamey. 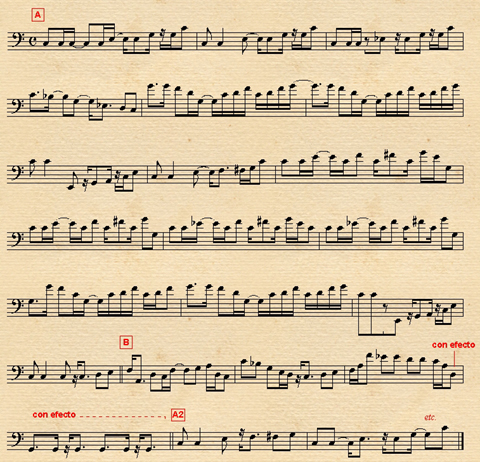 Juan Crespo Maza's cuerpo is a masterful example of pop songwriting -- catchy, deceptively simple, and full of unusual nuances that continue to grow on the listener, such as the abrupt modulations between C major and C minor. Humberto rises to the occasion with a funky bassline worthy of Jamerson himself, complete with virtuosic upward R&B figures in the A section and "walking bass" for the bridge. In addition to composing credits, Maza is listed as the arranger of La chica mamey, Matrimonio feliz, and, possibly the earth-shaking groove la Ritmo ever recorded: Ahora sí, voy a gozar.