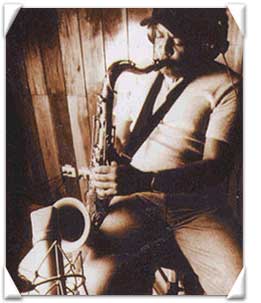 In December 2003 Juan Manuel Ceruto was voted Best Timba Saxophonist in the Timba.com Awards. Click here to read a brief account of his "award ceremony" in January 2005. [Michelle White]

One of the most important figures in Timba, Juan Ceruto is described by friends as "the absent minded professor". Gifted with a Mozartean ear, he does all his writing without the aid of a piano or computer, sketching out complex musical scores directly from his inner ear, in tiny musical shorthand with only pencil and paper. No one but another skilled Timba arranger could make heads or tails of these scores, but when translated into finished music by Havana's best musicians, the scribblings of this eccentric genius become gloriously accessible to rest of the world. Ceruto wrote every arrangement of Paulito FG's wonderful career until he left in the middle of the recording of PFG's most recent disc to pursue a freelance career. His first task was to share the arranging duties with Joaquín Betancourt on Issac Delgado's Grammy-nominated "La fórmula". He also released the Latin Jazz masterpiece, "A puerto padre", consisting of his creative re-arrangements of compostions by one of his early mentors, the late great pianist Emiliano Salvador. It was an approach that Ceruto has used several times, most notably the famous "Gracias Formell" which featured an all-star group interpreting Ceruto's dramatic reworkings of Los Van Van classics.

Now that he's no longer actively touring as a wind player, Ceruto, already very prolific and at the peak of his creative powers, is churning out more great arrangements at an exciting rate. [Kevin Moore]