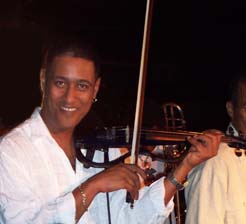 Most Latin violinists swing, but have raspy tone and intonation, and most classically trained violinists sound like they have a broomstick in place of a spine. But then there's Nicolás Gastón! He gives you the best of both worlds. He has a huge, powerful sound, with no goofy classical vibrato and dead-on perfect intonation. And his groove is as overwhelming as the rest of the Trabuqueros. I'll never forget a concert I attended at the Anfeteatro de Marianao. From a distance I was reveling in the brilliance of Manolito's arranging -- all the clever ways he sets the strings, brass, flute and teclado off against each other. "The cello and violín together is such a strong sound", I thought to myself, "this Manolito guy is a genius". But then I started moving closer and closer to the stage, until I was standing by the side, right next to the string section. To my shock and amazementI realized that the cellist's pickup had broken and that he was playing acoustically, which is to say, that he was completely inaudible!! The whole string section sound I'd been so taken by was in fact Nicolás Gastón all by himself, playing his electric violin through an octave divider and sounding well balanced against Manolito's powerhouse horn section of two trumpets and two trombones! Incredible! And yet another reason why, if you haven't seen the Trabuco live, la vida no vale ná'. [Kevin Moore] 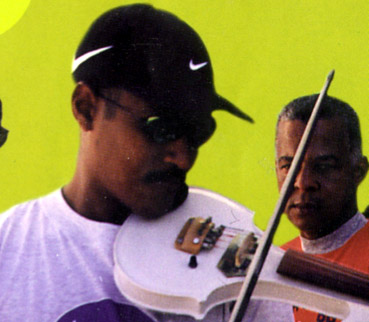