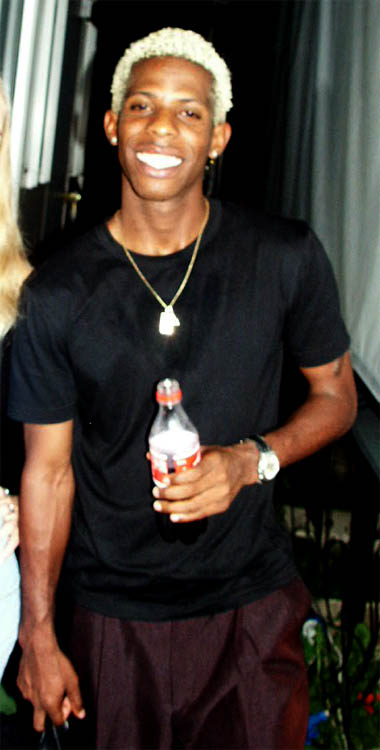 Junio Romero Valdés was born in Pinar del Río on February 20, 1975. He grew up there and studied at the Escuela Nacional de Instructores de Arte. When he finished his studies in 1996, he relocated to Havana and immediately began to work with Bamboleo, recording on their second album, "Yo no me parezco a nadie" and also on the CD they made with Rolo Martínez, "Para bailar mi son". Since 1998 he's been, as he puts it "ahí, tranquilo, trabajando con David". ("right here, very calmly working with David Calzado").

But "calm" is the last word anyone else would ever use to describe Junio Romero! In addition to his impeccable trumpet playing, he's a tremendous dancer and never stays still for a moment. Virtually all Cubans are great dancers, but Junio has a special "swing" and grace of movement that's magical to watch. Of the four brass players, he always stands on the outside and between his dancing and the vivid contrast of his dark black skin and bright orange hair, it's impossible to take your eyes off of him. His style and the joy he puts into his work is contagious and when you see him dance and laugh you can't help but do the same! [Majela Serrano]