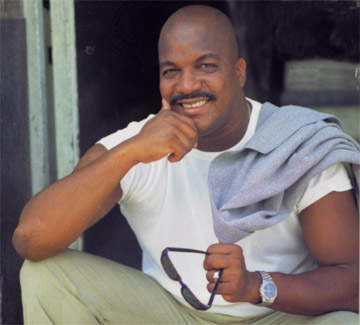 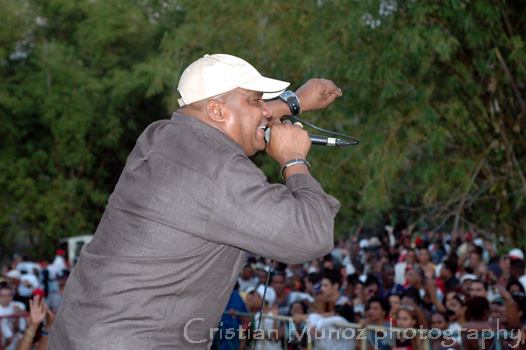 How could anyone possibly follow Mayito Rivera's "Soy todo"? "¡Ataca Guayacán!" -- [audio example] Roberto Hernández, el de "Esto te pone la cabeza mala", may be the only singer who could possibly accomplish that feat. "Roberto and Mayito Van Van", as many know them, are two of the most potent singers in the world of Cuban music.

Their boss, Juan Formell, is unique in the world of all pop music. Hundreds of mega-stars have continued to command large audiences in their later years, but only Formell has actually stayed on the razor's edge of innovation. A Los Van Van concert has none of the retro-nostalgic ambiance of The Rolling Stones, Frank Sinatra, or Duke Ellington in their waning years. Formell has continued to define modern Cuban music, even amidst the Timba revolution which has changed Cuban music so drastically, and a large part of this has rested on his brilliant personnel choices -- especially Mayito Rivera and Roberto Hernández.

Roberto's biggest hit, of course, is "Esto te pone la cabeza mala", which might also be Timba's biggest hit, but he lends the same overwhelming presence and swing to everything he touches. "Te pone la cabeza" is but the tip of the iceberg. Check out "Ni bonbones ni caramelos", "¿Quién no ha dicho una mentira?", "Permiso que llegó Van Van", "Eso dámelo a mí", and the gorgeous "¿Qué pasa con ella?". I had been listening to him for several years before I even realized that he started his career with Pachito Alonzo, but even in his earliest work with that group, his style and groove were rock-solid.

Another incredible example is his 15-second cameo appearance on Manolín's "Pegaíto, Pegaíto", from the 1997 masterpiece, "De buena fe". Manolín's coro, a la Mohammed Ali, compares his meteoric rise to fame to that of Los Van Van ("yo como Van Van...ahí...así..."), and then suddenly Roberto and Mayito jump in for one guía apiece. First Manolín quotes "El baile de buey cansado", a song which Van Van expert Abel Robaina, who grew up in Cuba during the Van Van era, says has a special significance. It was the only period (1982) when it looked like Van Van might possibly be losing their grip as the most popular band in Cuba, but when Formell came out with this song, LVV returned to #1 as if it had never skipped a beat. Roberto quotes his own first Los Van Van recording, "Deja la ira", and twists the melody around Manolín's Pegaíto chord progression so brilliantly that it simply has to be heard to be fully appreciated. [audio example]. The next voice is Mayito, who quotes one of his Van Van classics, "Soy todo". When I got back from my first trip to Cuba, "De buena fe" had a firm grip on my car stereo for an extended period of time and I could never get past this segment without rewinding at least a dozen times.

Like Mayito, Roberto is a regular guest artist with the best bands on the Havana club scene and when he's "in the house", the band and the crowd are always buzzing with anticipation. Roberto has truly mastered the art of improvising words and melody simultaneously and his depth of feeling is so strong that he's virtually incapable of singing a bad phrase. Even the greatest singers, if you hear them night after night, have their highs and lows, but a select few are almost infallible. Paulito comes close, using his finely-honed vocal technique and razor-sharp wit, but Roberto does it with puro sabor. It's as if he's incapable of singing a bad note -- every sound that resonates from his massive chest is so heartfelt and real. [Kevin Moore]