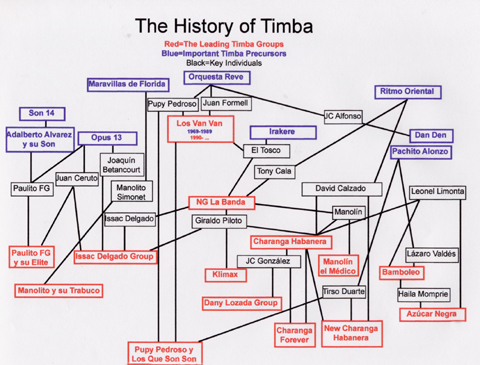 This chart was made more than seven years ago. It was incomplete then and is even more incomplete now, but still quite interesting. The names in black are key bandleaders, composers, arrangers and lead singers who have played key roles in one or more of the major Timba bands. The lines show how key figures from various bands contributed to other bands. For example, Giraldo Piloto, after playing drums with NG La Banda, composed important songs for Charanga Habanera, then became the drummer and musical director of Issac Delgado's band before forming his own group, Klimax. Manolín, while never a member of NG, was discovered by El Tosco, and did some writing for them (and Charanga Habanera) before forming his own group. Leonel Limonta wrote for Charanga Habanera and Bamboleo prior to forming Azúcar Negra. I'm looking for a more updatable way to display this information. For example, at the top of the chart, there should be a line connecting Revé to Ritmo Oriental, which spun off from Revé in 1958.