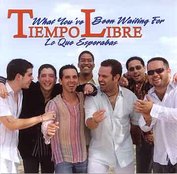 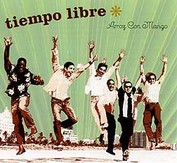 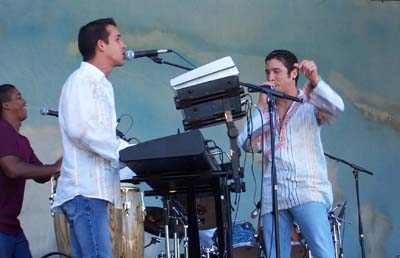 During a recent trip to California to visit friends and family, I finally managed to see Tiempo Libre for the first time, even though we all live in Miami. This took some explaining to the friend I dragged along . . ."so, we're driving 2 hours to Sonoma, to see a band that's from where you live?" Well, yes. The band has somewhat of a legend status in Miami, where it's been a while since anybody has seen an increasingly routine and slightly tired performance by Manolín or Carlos Manuel -- you hear of a good new band called Tiempo Libre, but almost nobody has seen them play. Given those circumstances, a two-hour fight with Bay Area traffic seemed a small price to pay for some timba and the scoop on whether this band is going to come through and bring some life to the music scene in Miami.

The opening tune sounded great from the parking lot of Sonoma State University (thank you, hwy 101), and we made it inside to hear most of Contradanza, a Latin jazz composition by pianist and director Jorge Gómez. This was followed by a second jazz number called Contacto la Habana, written by percussionist Fernando Pina, who co-founded the band with Gómez. Right away, I noticed that their live sound seemed somewhat better than what you hear on the one album they have released so far (called Timbiando), and I contribute a good amount of that to bassist Tebelio "Tony" Fonte, who joined the band after the album was made. He brings a lot of precision to the complicated bass lines so typical in timba. 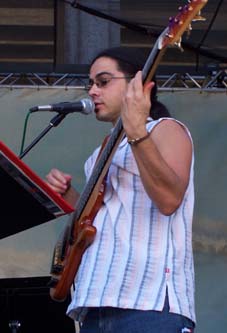 During the first two tunes, the audience at the Green Music Festival sat politely, enjoying the sunny day and the good music that had been programmed for this occasional detour in a otherwise classical music festival. They aplauded enthusiastically when songs ended, and then went back to their picnic lunches and wine. Then Jorge addressed them, and asked if they were ready to get down the Cuban way with some Cuban salsa -- this elicited the standard enthusiastic response, except for a small group of people dressed in red and black and standing just to the right of the stage, who really gave a shout and waved their arms in the air. Once lead vocalist Joaquín "El Kid" Díaz was introduced and the band launched into an aggressively modernized version of El Cuarto de Tula, it quickly became clear that the group in red and black was the local casino and rueda group/class. They took to the dance floor that had been set up on the lawn, and made it look easy enough that others soon joined them to give it a try. 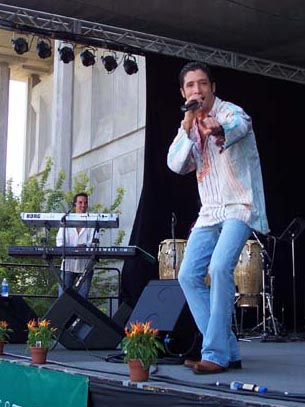 It was a great surprise to see El Kid in the spotlight -- he has the confidence of a seasoned performer, the energy of the youngest timbero out there, and some serious dancing ability. His tone and range are awesome, he's a first-rate sonero, and it's clearly high time he got out of the shadows as corista for Manolín and others. 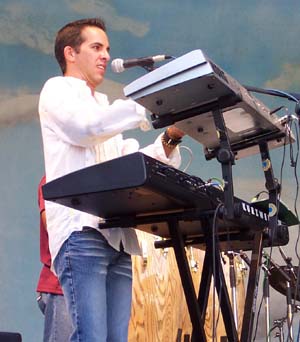 The set list for this concert tells us a lot about how the band approaches the challenge of starting a timba band from scratch (in terms of notoreity, not ability) in Miami. The majority of the repertoire I heard consisted of older well-known dance tunes like Bilongo, Lagrimas Negras, Cochero, and El Guanajo Relleno. As director Jorge Gómez explained, this portion of their repertoire is part of a strategy to reach Cuban-American audiences and others not yet familiar with the more raw, aggressive sound of timba. They take a recognizable song to make them comfortable, and as the arrangement progresses, so does the timba. The result is still a little more tame than your typical Casa de la Música matine in Havana (the band seldom did a full-on bomba/tembleque section, for instance), but the rhythmically complex and virtuosic goodness are still there. 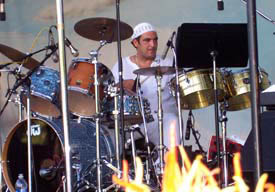 Playing timba in la yuma often requires modifications to instrumentation, as well, and economics are to blame -- in order for the musicians to be able to put food on the table, the pay needs to be split between fewer people. Hence, Tiempo Libre's 2-man percussion section. The baterista Fernando Pina takes on both drumset and timbales, while congüero Leandro González fills things out with heavily syncopated tumbaos. This kind of downsizing doesn't do a lot of harm musically, as long as the musicians are super-capable -- Pina and González rise to the challenge, just as Reinier Guerra and Tomasito Cruz did for Manolín's live album El Puente (recorded in Miami). Tiempo Libre also has a slimmer horn section than their Cuba-based counterparts, with Julio Díaz on trumpet and Eduardo Quintana doubling on flute and EWI (electronic wind instrument). The smaller numbers are partially compensated for by the EWI, which can be programmed to sound like a few brass instruments playing at the same time. This is the one area where the band's sound falls more noticeably short of those from the island, although certainly through no lack of ability from the players. 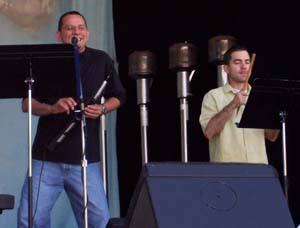 As Tiempo Libre wrapped up their performance, the dance floor was crowded with people, and a harem of El Kid groupies was forming directly in front of the stage. The call to play one more came right away, and they obliged with El Guanajo Relleno. We only got to hear one more of Gómez's compositions, Mujer de Fuego, which confirmed what all his arrangements of older standards suggested: there is definitely potential here. He works well with the musical elements that make timba what it is, like bloques (complicated percussion breaks), interesting piano montunos, and gear shifting. While talking to him after the show as he stood signing autographs and selling CD's, he expressed his determination to establish the group as a bona fide timba band in the US. This attitude is shared by the other members, many of whom left gigs with more well-known acts to devote much more than their free time to the success of this band. Manager Elizabeth Sobol, an American who represented big time classical acts until she heard timba one night in a bar in Mexico, commits extensive time and effort to putting the group on the map. It's a lot to take on, and no wonder that they have to be somewhat chameleon-like with their music in order to attract people unfamiliar with timba on the one hand, and please audiences well-versed in timba on the other. I have a lot of hope that they won't go the way of other timba acts who have settled in Miami in recent years, only to atrophy creatively and be tempted by quick-fix Latin pop contracts in hopes of maintaining their popularity. The Tiempo Libre guys know that they're starting small, and are prepared to put in the time and work para que la timba se pega en la yuma -- support them, and let's see where it goes.