The Piano Style of Tirso Duarte - Kevin Moore is planning several full-length books detailing Duarte's style as part of the 25-volume series, Beyond Salsa Piano: The Cuban Timba Piano Revolution. This article provides a preview of some of the MIDI material on which the books will be based.

The Bloques of Charanga Habanera - Charanga Habanera has arguably the most creative and varied approach to rhythm section breaks, or bloques, since the legendary Ritmo Oriental. It's no coincidence, given that David Calzado began his career in that band and founding timbalero Eduardo Lazaga is the son of Ritmo Oriental founder, Enrique Lazaga. In this article, Kevin Moore goes systematically through each album, isolating the bloques and presenting them in chronological order with analysis.

Clave Changes in the Music of Charanga Habanera - There's no more deeply-misunderstood or hotly-debated subject in Latin music than clave and "clave changes" and Charanga Habanera's arrangements are ground zero in this controversy, containing multiple examples of every possible way the clave can be creatively manipulated. Kevin Moore attempts to demystify matters in this analysis of the first two Charanga Habanera albums.

A Clave Analysis of Tremendo delirio - A continuation of the above article, centering on the fourth album. 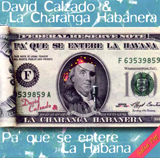 Covering lyrics, arranging, songwriting and vocals, with dozens of streaming MP3 excerpts so you can listen to the passage being discussed.