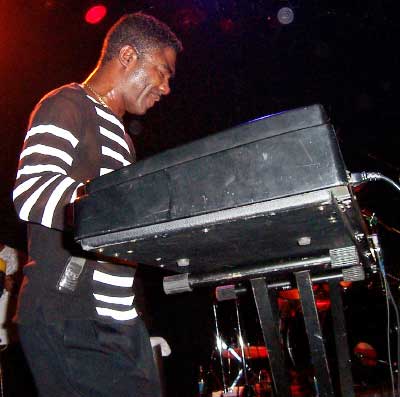 Sometimes fate smiles on us and this time it was my turn. I was sent to Holland to visit a customer, and my business trip just happened to coincide with the concert of Manolito y su trabuco in Amsterdam. Not only could I see the concert, but it provided me with the perfect opportunity to present Orestes Calderón, Manolito's cellist, with his award for Best Timba Cellist. Click here to listen to the MP3s of the interview with Calderón.

For me the opportunity to meet the band was extra special because Manolito's CD Marcando La Distancia was the first Cuban CD I bought. I fell in love with his tumbaos the first time I heard the title song, little knowing that it would lead me to an obsession with Cuban music that would one day make it possible for me to actually meet the band.

But enough about me and on to the concert. It was held at Melkweg (Milky Way) which has good acoustics so the sound was good throughout the concert. When they came on stage they caught the attention of the audience by starting with a short intro from Locos Por Mi Habana which turned into La Boda de Belén. 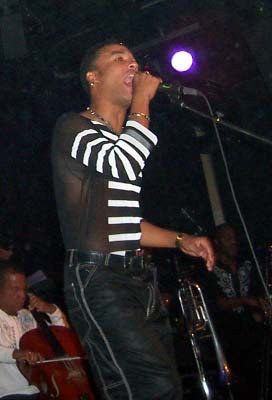 Ricardo is a great performer who combines a distinctive voice with an enthusiasm and energy on stage that make him a favorite with the audience. Songs that he sang this night included Tú Me Dijiste Mentiras, Locos Por Mi Habana and, during a medley of older Manolito songs, Todavía Noand Tú Me Recordaras.

Locos Por Mi Habana is already a classic among Manolito fans, and I think if Ricardo had put down his microphone the audience could have sung the entire song by themselves...of course it wouldn't have sounded as good. By the end of the song there was no doubt that todos los locos vinieron esta noche y Manolito fue su psicólogo.

In addition to Ricardo's singing, I find him to be one of my favorite songwriters. I always like the songs he has written: on the new CD these are El Amor Todo Se Puede, En Este Juego, No Te Pases and he co-wrote Locos Por Mi Habana with Manolito. 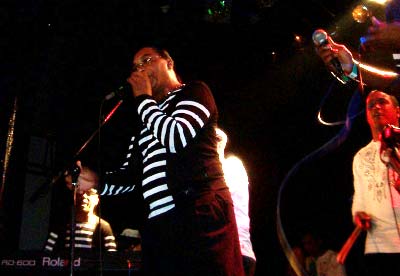 El Indio - one of the great contemporary soneros

They raised the temperature another notch with the next song, El Diablo Colora'o, sung by El Indio, one of Cuba's great contemporary soneros. This song demands that you dance. 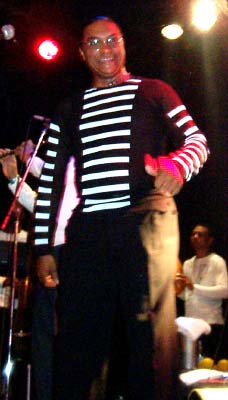 Thumbs up from El Indio

But of course you all have heard by now that Manolito has a new singer, and I know you want to hear about him. Bueno, his name is Lázaro, and he's tall and good looking and is singing an estreno at the concerts. It has a coro that says "Tú no sabes na'", but I don't know the name of the song. Although it is so new it's not even on the CD, he had the audience singing along with the coros before long. You may find yourself singing  "uriki taka tiki, uriki taka ta" on your way home from the concert. 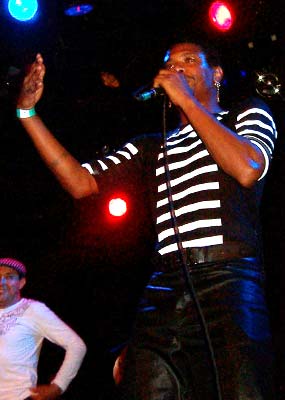 I didn't get a chance to talk to him so I can't say much else except that he has a very nice, fairly deep tenor and seems quite comfortable singing lead. I'm curious about his previous experience, and where he learned the art of engaging the audience. We will be keeping an eye on his development as a singer.

I've seen Manolito y su trabuco once in Stockholm in 2000, but then I was still too shy to push my way up to the stage, so I can't be sure, but it seems to me that their concert includes more dancing than previously. Ricardo, El Indio and Lázaro dance quite a bit including some sections of choreographed steps and turns. We're not talking choreography like El Clan, just some coordinated dancing by the singers, and also the strings and David Bencomo join in at times. They encouraged the audience to dance with them on a few occasions, and, of course, we obliged.

Manolito is one of few contemporary Cuban bands that has maintained the charanga setup including flute and strings. This gives them a musical versatility as well as being a part of their distinctive sound. Check out the interview with Orestes for his views on this. 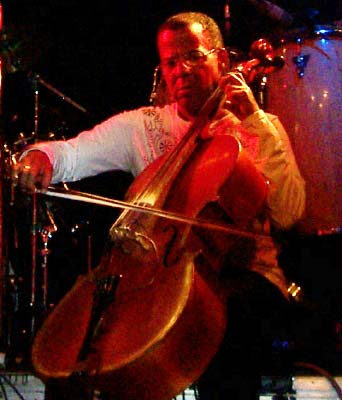 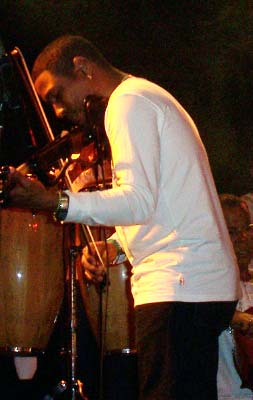 During the course of the evening we were treated to a number of solos by Manolito, David Bencomo and some of the metales. They all sounded great. I'm glad we didn't have any sound issues because this band is tight and you want to be able to hear all the parts in the arrangements. But the solos really give you the opportunity to experience the virtuosity of the individual musicians. 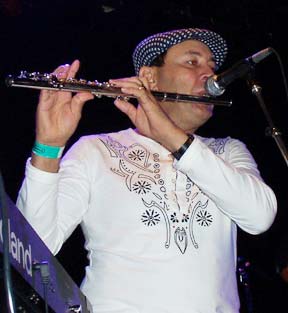 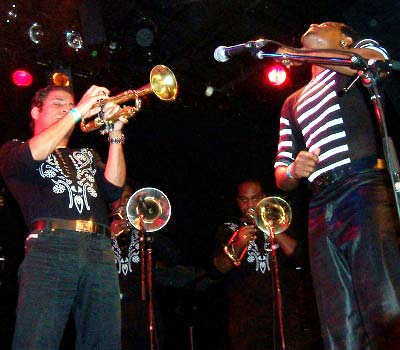 The engine that keeps the trabuco going is the rhythm section, but alas most of them were too far back to get pictures. Roicel Riverón on drums and timbales is amazing, so try to keep an eye on him at the concert. 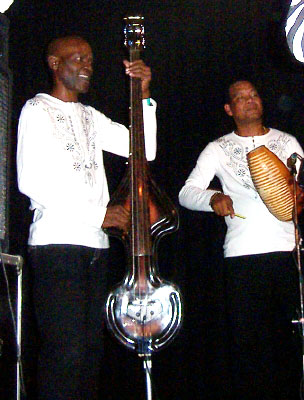 The last song of the concert was Marcando La Distancia which was preceded by a piano solo that Ilán called "where's the 1". Only the presence of a strong rumba clave by Riverón made it possible to figure out where the beat was. This was a favorite with the audience of course, but don't think you've heard Marcando enough times that you know exactly what to expect. They've added a number of new coros and some other surprises. 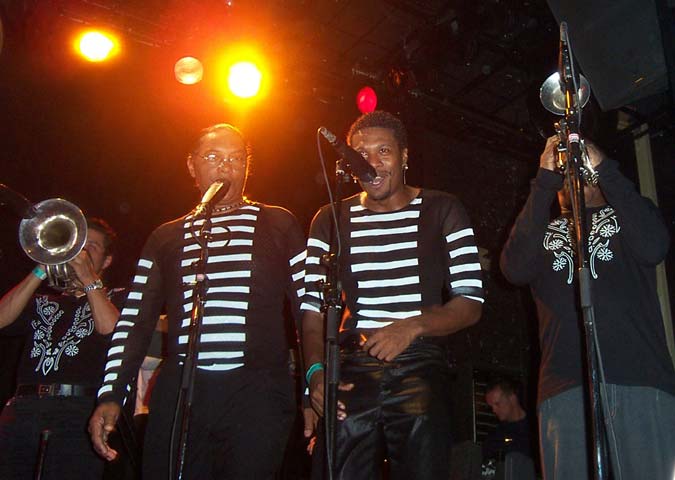 In the end, the true measure of a concert is the reaction of the audience. At Melkweg there was no doubt that it was a successful night for the trabuco. The crowd joined in singing on every song and the dancing went on non-stop ranging from despelote to casino. The people weren't ready to let the band go after the last song, so they came back and immediately raised the temperature once again by starting with Lázaro's "uriki taka tiki" coro. After this El Indio sang Llegó La Música Cubana to the delight of the audience.