Manolito y su Trabuco have always been one of my favorite groups, but really I think that right now they are hotter than ever in concert, even exceeding expectations. But if I've liked them for so long, why do I like them even better now? Is it the impressive musician roster, the recent addition of Pan con salsa on keyboards or the current line up of singers that makes the Trabuco hotter than ever in concert? 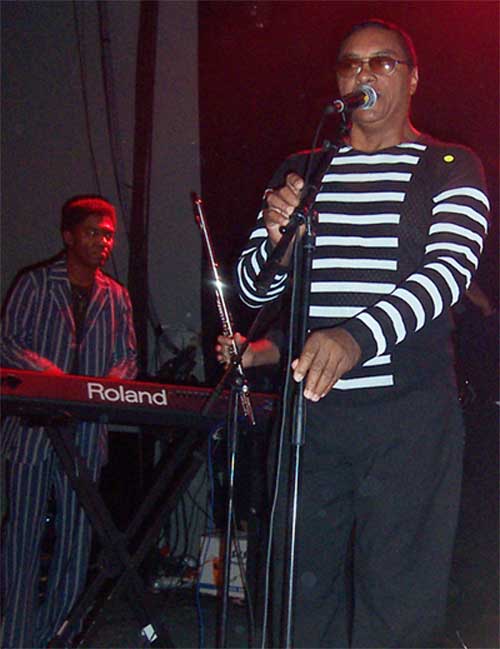 Many people consider El Indio to be the best Cuban singer of recent years. His classic sonero style, vocal control, phrasing and ability to improvise make him highly sought after on projects by other bands, such as Mamborama. Amaray has wrtten a number of hits for the Trabuco, as well as for other bands, and has a deeper, R&B influenced voice that has sung many of the hits of recent years. The newest singer Lázaro "Mayami", now on his second European tour with the Trabuco, brings new energy to the group with his dancing and his background as a rapero.

The concert was supposed to begin at 21:00, because the venue would only allow the band to play until 23:00. To compensate for this, the arrangers set up an a post-show party featuring violinist Emilio Estrada and his group in a jam session with some of the Trabuco, but more about that later.

The concert didn't actually get underway until about 21:30. They have changed the show a bit since I saw them in January, and the opening number was my favorite chachachá: Se rompieron los termómetros. They followed this with another favorite from the same album, Tú me dijiste mentiras. 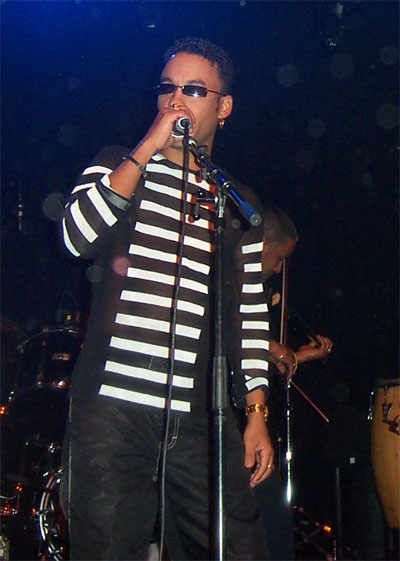 Then El Indio took over with the super caliente Aquí cada uno viene con lo suyo from the multiple award-winning album Locos Por Mi Habana. This is such a great song and El Indio sings it to perfection. I love the line "hay que aprender a nadar pa' no morir en la orilla" as well as the "oro mi mama yo co da, oro mi" coro that you won't find on the CD.

Next they slowed things down with the beautiful song El amor todo lo puede. It is perfectly suited to Ricardo's voice, not surprising considering he wrote it, but in concert they've added a new section so we finally got a chance to hear "Pan con salsa" performing a solo. 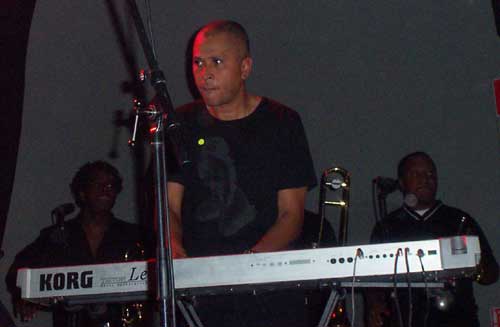 They also treated us to some classic hits such as Caballo grande, which features a great solo by Manolito himself. And Ricardo followed with a few classic coros from El águila and Todavía no with a great deal of audience participation.

But now it was time to look to the future. The Stockholm audience got their first introduction to what Lázaro "Mayami" is capable of, and I can say with absolute certainty that his premier here in Stockholm was a great success. I saw him perform La Raspadura last June in Holland, but I would say that he has really hit his stride now. 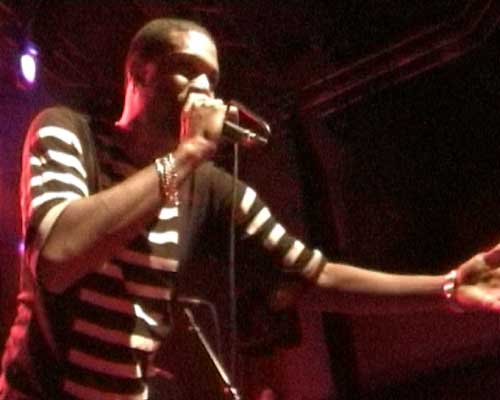 First, let me say that throughout the show the ladies were commenting on his dancing and his ability to temblar. But when it was time for him to sing his new song, Pa' que se abran los caminos we could see that he'd been holding back. He has a very nice, smooth voice and an abundance of charisma. His dancing included some pa'l piso, some columbia, some other afro-cuban steps and some...well, I'll leave it up to you to go see what he gets up to in concert. But let's just say he had the ladies in his hand by the end of his song.

El Indio sang another of the Trabuco's dance hits, El diablo colora'o, and invitado Lázaro, who now resides in Sweden, came up to play a sax solo. El Indio gave us a little demonstration of hi improvisational skills making up a few lines about Lázaro before finishing up the song.

Then the unthinkable happened, the managment of the venue said that the band had to finish up. Ricardo sang the exito of 2004 Locos por mi Habana to end the show, and of course the audience sang along as well. As the band left the stage the audience was not ready to let them go. Everyone chanted "otra, otra..." until the venue management was finally forced to come up on stage and say "OK, they can do one more song but that's it". I think they were afraid to face 750 angry timba fans. The encore was Marcando la distancia, the mega hit from the very first Cuban CD I ever bought.

Fortunately the night wasn't over. We still had the post-concert party to go to, which was held two floors above in the same building. Emilio Estrada's band set up and performed some latin jazz and some other more timba-like, danceable songs with Emilio performing some great violin solos. The trabuqueros joined the party and were scattered throughout the audience dancing with and talking to the fans. 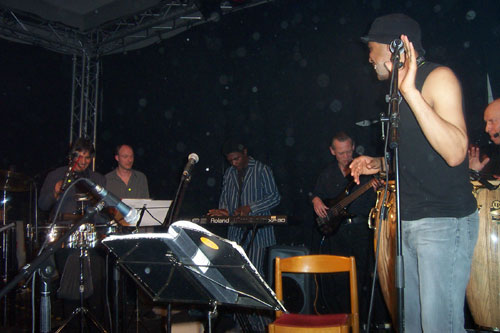 At one point the band was joined by Manolito on piano and Rafael Arbolaez on trumpet. Later Manolito played some bass, which was a lot of fun to hear. Few people know that he actually started out playing trés. 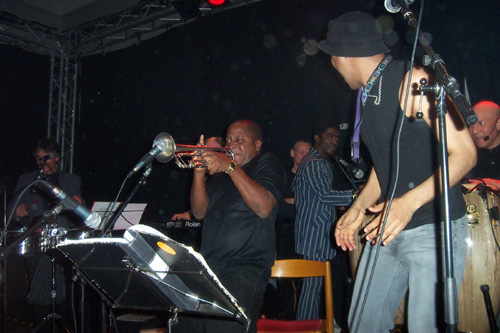 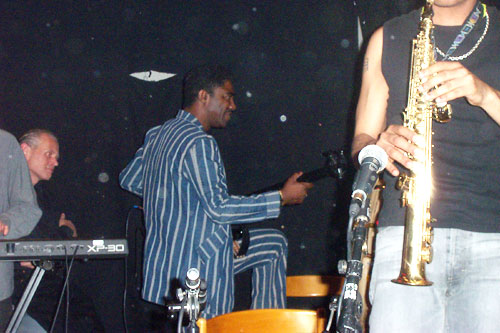 Manolito switched the bass for a song or two

The party lasted until 03:00 when the venue closed. All in all a great concert and a fantastic evening for all the fans. They will be touring for the rest of the month and into May, so check their tour schedule to find the concert nearest you. They are en la cima right now, and believe me when I say you do not want to miss this tour!