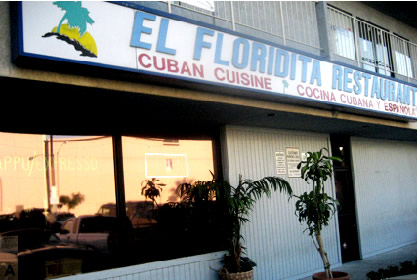 "Just seeing an old guy hustle the ladies on the dance floor in his head-to-toe white outfit is worth the trip" to this "slice of Buena Vista Social Club" in Hollywood; "don't forget to ask for a mojito" to wash down that "fab, authentic Cubano cuisine", then "sit back and enjoy the great show" — or, "if you like salsa", "shake what yo mama gave ya" to the "excellent" live music amid "lots of Latin cleavage"; just "make a reservation, or you won't get in." - ZAGAT SURVEY, L.A. Nightlife 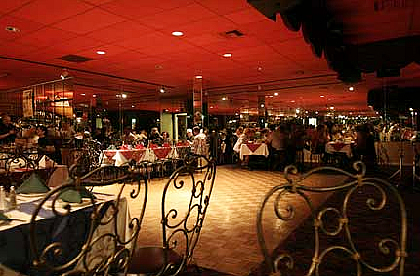 HISTORY:  First established in Habana, Cuba in 1820 as "La Piña de Plata" (The Silver Pineapple), then in 1898 being renamed "La Florida", the place was finally christened and referred to as "La Floridita" by its customers. To Hemingway, the restaurant was his favorite place as is depicted by the following excerpt from author Norberto Fuentes' book Hemingway in Cuba.

"In those days he became acquainted as well with the Floridita, a seafood-bar restaurant... There the Daiquiri cocktail was created which Hemingway helped to make known throughout the world. But as he was to write later, his main interest in the place was no so much its food and drink, but his desire to meet the tempestuous current of his countrymen who passed through the city."

The Floridita eventually became a haven for Cuba's leading personalities - including merchants, politicians and for most celebrities living in or passing through Habana. Such names include several of Hollywood's greatest - Errol Flynn, Ava Gardner, Gary Cooper and John Wayne.

Hemingway had such an impact and influence to this "Bodeguita" that a bust in his honor was placed over his favorite stool when he won the Nobel Prize. To this day, people still gather to the Floridita to have excellent cuisine, and to taste the famous daiquiri - however, the most popular reason people go is to absorb the aura and the mystique left by Papa. It is not El Floridita's intent to revive the old glory, but to merely carry on the legacy in Hollywood!