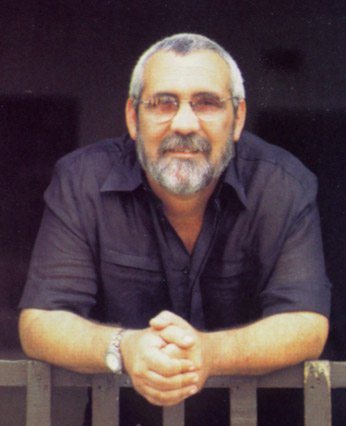 grabaciones/recordings: All LVV since 1984 (Vol. IX)

Hugo Morejón, in addition to playing trombone, is an important creative force in the music of Los Van Van. He's written many of the wonderful horn mambos that are such a big part of the sound of "El Tren". He's also an accomplished keyboardist and has played many memorable synth solos for LVV, such as this gem [audio example], played live at La Tropical, from the 1995 masterpiece, "Lo Último en Vivo". Hugo also wrote the mambos on either side of the solo.

Hugo was born on April 20, 1956. At the age of 7 he moved to Matanzas where he began to study with Rafael Somavilla Sr.,a professor who's son later became a famous musician in Havana. In 1970, Hugo returned to Havana to study at the ENA for six years (called Cubanacán at that time), and then he began playing professionaly with the likes of Pacho Alonso, a rock group called Los Dada, and Adalberto Alvarez y su Son. In 1984 he joined Los Van Van and continued working with them until his death. Hugo el trombon matancero passed away on March 20, 2021.
[Kevin Moore]