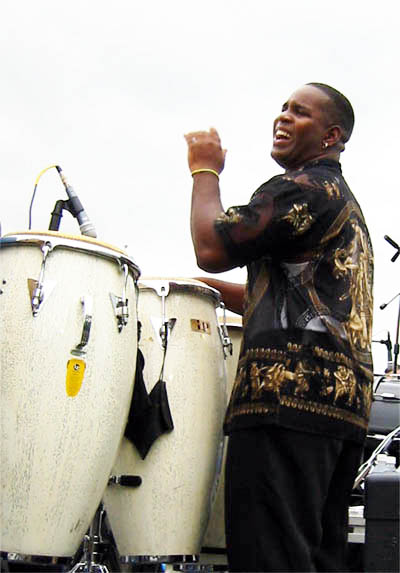 Dennys “Papacho” Savón-Navarro was born in Guantánamo, Cuba on May 16, 1981. He began playing congas at the age of 4 under the direction of his father, Lorenzo “Papacho” Navarro who has played with many groups such as Sol Caliente. At the age of 8 he began at the Escuela Vocacional de Arte Regino Eladio Botis and by the age of thirteen he had progressed significantly, allowing him to be eligible for consideration for the Escuela Nacional de Arte in La Habana. He was accepted, and made the sacrifice to move to La Habana in order to study percussion. Dennys moved in with his aunt in San Miguel and commuted 4 hours every day to study at the Escuela de Arte. His hard work paid off and at 16 he began as the conguero for Carlos Manuel y Su Clan. By this time he was already considered one of the best young congueros in Cuba and was sought out by Issac Delgado 2 months later. He began playing and touring with Issac in April of 1998 and has been with the band ever since. At the ripe age of 20, Dennys has established himself as one of the most sought after percussionists in Cuba. He recently formed a Latin Jazz band, La Nueva Luna Tropical Band, and as co-director with Rolando Luna (pianist for Issac), he played weekly at La Zorra y el Cuervo. [Danielle Clealand]

Papacho has since moved to Miami.