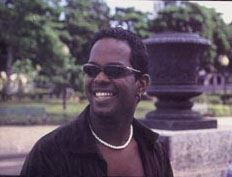 Yosvel Bernal began studying trombone at the Escuela Nacional de Arte under the tutelage of Alvaro Collado. He quickly became well known at the school for his great musiciansip. Yosvel's first gig in a band was as a singer. At 17 he was asked to join the jazz/timba group Afrocuba as a lead singer but chose to continue his studies. When Paulito y Su Elite contacted him to be a backup singer/keyboardist, he quickly decided to forego his education and pursue the world of timba. Not ever studying keyboard formally, Yosvel shows a knack for the technique and an incredible ear for melodies and harmony. As a lead singer, his voice is mellow and reminiscent of Brian McKnight. . . only Cuban. [Curtis Lanoue]

An incredibly talented musician/singer/arranger, Yosvel Bernal was part of the legendary Paulito group that recorded Con la Conciencia Tranquila. After 5 years with the band he's now pursuing a freelance career which has involved recording on both Sol y Soul recordings and has now taken him to Spain. His uncle is "Mundo" one of Los Van Van's trombonistst. [Kevin Moore]