I saw Calixto's band La Recompensa for the first time 6 months ago in Stockholm, and was immediately impressed with the musicianship of the group. There have been a few changes since then: they have a new singer and they have a new timbalero.

¿Cómo? ¿Un timbalero nuevo? That's right...Calixto has replaced the timbalero, i.e. himself, and instead moved up front to take a place at the microphone as a singer. This was something I just had to see.

Unfortunately for you all I was remiss in my duties and did not actually get a photo of Calixto singing! I think Kevin may fire me. But I'd rather think of it as providing incentive for everyone who has the opportunity to go see it for themselves during the tour. Hopefully there will also be another tour of Europe this fall somewhere between the recording of his new CD and the trip to Japan in November.

The musicians were just as good as last time. I know that some people have a tendency to have a prejudice against non-Cuban musicians playing timba, but Calixto knows how to find the best, and has put together a band that combines Cubanos, Europeos and Argentinos and will satisfy even the most discerning timba lovers. And at least I did remember to get a picture of El Vikingo, also known as Jannik Hartig, the new timbalero who did a great job. Of course what else would you expect from a timbalero hand-picked by Calixto? 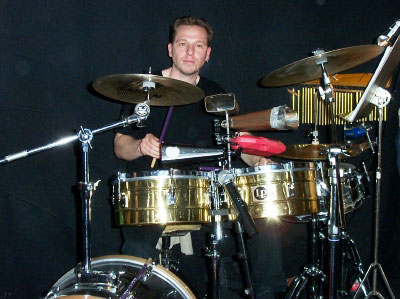 I really should have asked him what it feels like to take over for a famous timbalero when that timbalero is still in the band, kind of an unusual situation. But once again I kind of didn't do that...sorry Kevin. So what was I doing at this concert? Dancing! I did a lot of dancing, and had a great time thanks to some very good dance partners. In fact the music was so good even during the sound check that I had to ask a girl to lead so I could dance.

And now I know you're all wondering how Calixto is as a singer. Did Yulién inherit his singing talent from his mother or his father? Well I've never heard his mother sing so I can't answer that, but I can say that Calixto has a good voice and of course a tremendous sense of phrasing. He did a very good job, and it was fun to see the interaction between Calixto and Lily. But of course he couldn't stand to not be doing something percussive, so he also played maracas and campana while he sang.

I know that there are some of you who just can't stand the idea of seeing Calixto in concert but not hearing him play. But don't worry, he and El Vikingo switched places twice and we got a nice dose of Calixto's timbales as well. So it was a very satisfying evening both musically and dancing-ly. And now they are off to Italy for classes and concerts. 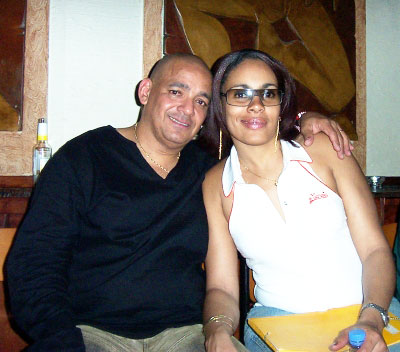 Calixto and Lily relaxing after the show