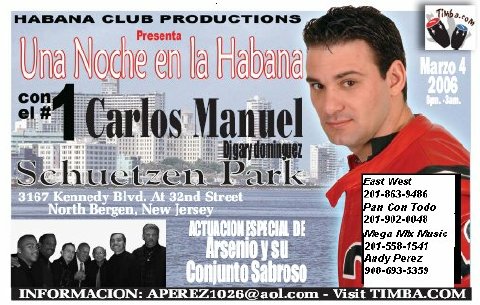 In 1999, Carlos Manuel y su Clan was a young, up-and-coming timba band and Carlos himself, an extremely talented and charismatic vocalist, could frequently be heard around town sitting in with the likes of Los Van Van and Manolín. The group developed a large young following and became more and more popular until they had an explosive breakthough in late 2000 with the novelty hit "Malo cantidad". It became a massive hit and was heard everywhere, all the time, for months, like Issac's cover of "La vida es un carnival" the year before. For a brief period Carlos became the hottest star in Havana, and he capitalized on the success of Malo cantidad with a string of similar, catchy non-timba songs. But then, in about 2002, he suddenly moved to Miami. His band, reformed under the leadership of pianist Pedro Camacho as "El Clan" and his its own artists section on timba.com. Meanwhile, Carlos, like Manolín before him, learned the English phrase which is often used to describe Miami: "Timba Graveyard". He's popped up occasionally and now, as of early 2006, has put together a new group in New York which has created quite a buzz and looks to be his best shot yet at catching on in the States. [Kevin Moore - 2006]