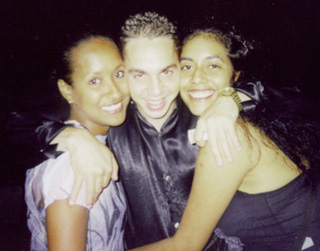 Sandier Ante Fajardo a typical Scorpio. He was born on the 31st of October, 25 years ago..

He first studied music at a school called "Paulita Concepción", and later specialized in tuba at the consevatory"Amadeo Roldán".

Part of the curriculum of Amadeo resulted in the formation of a group called "Los Chicos de la Salsa", where, for a period of about a year, Sandier began his career as a singer. After leaving Los Chicos, and leaving school in the middle of his third year of the middle level, he started to sing in groups such as "La farándula" and "Sabrosura viva", together with his brother, Maikel Ante, who later sang with Irakere and now, among other things, sings with Sol y Soul.

De "La farándula" Sandier had the opportunity to become part of Charanga Habanera, en agosto de 1997, just after the famous suspension that the government imposed on the group.

As we know, Danny Lozada and Juan Carlos González left La Habanera in the final days of July of that year, after the concert which provoked the suspension. And it was Sandier who was brought in to replace the departing Danny Lozada. He rehearsed with the band for the almost six months of suspension, y contributed some of his own songs to the reportoire..

This gift seems to have been inherited from his father, Antonio Ante, a composer.

Sandier was only in Charanga Habanera for a year, and in the summer of '98 decided to go with the majority and to form the new group, Charanga Forever, with whom he stayed for some time, recording their first and only full length album. He also wrote various songs for this group, including the controversial "La Charanga soy yo".

He later decided to launch a solo career, participating in various projects, both Cuban and international (such as Sol y Soul), and also recorded his own songs with his brother Maikel.

In December of 2000 he was reunited with Juan Manuel Arranz (ex-keyboardist of both Charanga Habanera y Charanga Forever) in a musical project in Chile which is contracted for a year, with other young and talented musicians about whom we unfortunately know very little right now. [Majela Serrano]