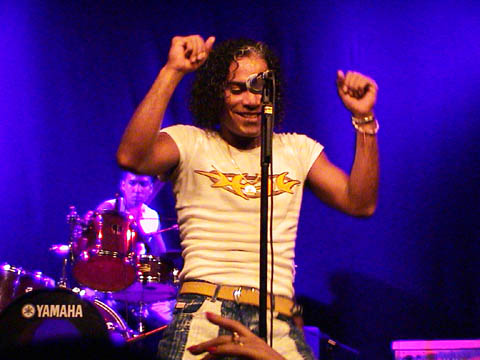 This is my first time going to the same concert 2 days in a row. But they were actually quite different, which was interesting. I would say that the Gothenburg concert had somewhat better sound and was more organised, while Stockholm was too loud (but that didn't bother me much) and more spontaneous with not one traditional song and much more interaction with the audience. Also there was no salsa event before or after the Gothenburg concert so we were left feeling like we just had a dose of timba and then interruptus! In Stockholm there was a DJ before and after the concert and I actually got to dance with the bongocero!

The Gothenburg concert was held at 18.00 at a festival. It was free and the audience was probably a few rows of salsa fans and the rest just wandering festival goers. Not much dancing in the audience. 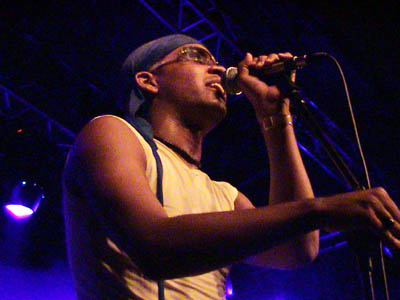 There were 13 members, including the 3 singers. On the ads it says they are 15 members and the CD lists 4 singers. But according to recent gossip, CF lost 2 members in Switzerland.

One bad thing was that there was a fence put up keeping the audience away from the stage. This hindered the audience/band contact, although Sombrilla just hopped the fence and came out into the audience to sing at one point.

They started with Somos La Charanga. They also sang maybe 3 or 4 songs of the new CD, but I left it at home and don't remember the names right now except Son De La Loma. They did a lot of dancing throughout the show, with a couple of choreography sections where many of the band members left their instruments and danced as well. And my favorite part of the show had to be when they did a CH popurri as encore and the singers whipped off their shirts for Quitate El Disfraz!

When they sang Pelotera La Bola, they had 3 Cubanas up on stage dancing and I think it was a shock for the non-salsa audience. There were some childern that pushed their way to the front where they stood giggling over the overtly sexual dancing going on. Parents in the US would have had a fit if their kids had seen it. But it was *nothing* compared to what went on at the Stockholm concert.

In Gothenburg they did 3 traditional songs, maybe to cater more to the part of the audience that was expecting BVSC, or maybe because they had 13 members that night. Because one of the first things I noticed at the Stockholm concert was that one of the singers was missing! I have no idea if this was a case of defection or indisposition. The bongocero filled in as third singer, which meant that they had no bongos and basically no one on campana.

Actually the very first thing I noticed when the band came out, was that the singers were wearing better clothes (I wasn't too impressed by the velour sweat pants in Gothenburg). Apparently this seems to be a trend in salsa concerts - Stockholm = better clothes. 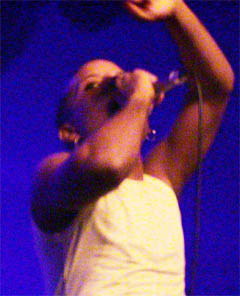 I have no idea where the other singer was but of course this affected their repetoire. The Stockholm concert was more loco - 'crasy' (as they say). The music was way too loud for one thing, and thank goodness we could stand right up against the stage. We could get a real relationship going with the band. And I can say that the guys definitely know how to play to the audience.

They started again with Somos la Charanga, they also did Mi mecanica, Me Sube La fiebre, Hey You Loca, a CH potpurri, and Como Pasen las Cosas, Mi medicina and Quince Primaveras from the new album. And others that I don't remember right now.

During the potpurri, which included Quitate El Disfraz again much to my delight, they had the ladies up on stage again. I can tell you that there is a big difference between Gothenburg and Stockholm. In Gothenburg 3 ladies shyly went on stage after saying 'No I couldn't' or some such thing. In Stockholm there was a line of ladies that wanted to go up. And I think that they try to outdo each other, so at each concert things get a little wilder. 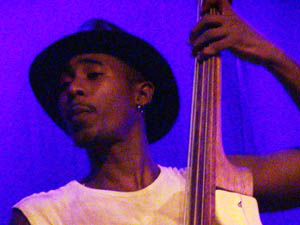 One of the ladies pulled her pants down for about 0.5 seconds, so we all got a look at her g-string. The next girl was very flexible and did the splits in front of Sombrilla which placed her mouth at, well a very provacative level, whereon she proceeded to grab a hold of his pants at the wasteband and pull herself up and down with her mouth positioned in front of his zipper. I think even Mayito was surprised, but he just kept singing and didn't even lose his balance. It's a good thing he was wearing jeans instead of velour sweats because otherwise we would have seen his undies too.

As for the new CD which I bought and had most of the bandmembers sign, it reminds me a lot of their first CD. The songs are good and solid timba'. I definitely like the CD, but there isn't one that jumps out at you immediately. There's also one ballad, which doesn't do so much for me, and Son De La Loma as the traditional song. It's a shame that they seem to be having so much trouble putting together a permanent group. I think they could really achieve a lot more if they didn't have to keep compensating for lost members. 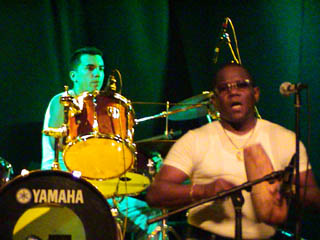