I have been a big Charanga Habanera fan since the first time I heard “Lola, Lola”, but  my last opportunity to see the band live was in October 2006. When the Stockholm concert was announced I was excited at the prospect of seeing the band again, but being a fan of hardcore timba, I was more than a little worried that the latest iteration of the orchestra would be too much boyband and too little timba for me. For the current list of bandmembers click here. 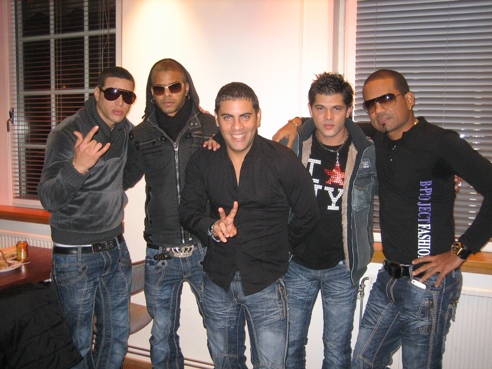 Los charangueros are sexy but more than just a boyband

Let me just begin by cutting to the chase: La Charanga es un vacilón. A Charanga Habanera concert is an event. It is a party where the band and the fans connect through music, dance and David’s silly conversations with the audience. It is virtually impossible to not have fun at a Charanga Habanera concert, no matter which version of the Charanga is your favorite. You cannot help but enjoy yourself. 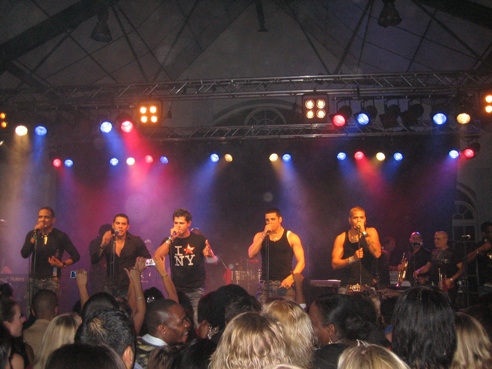 The Stockholm concert was the culmination of the fall European tour. It was arranged by Cuba Nocturna with a pre-show that included rumba by Grupo Raices, and reggaeton by Robertico “El Galán” and a new group La Nueva Unión with Frank Belicer and Yarién Oviedo. The audience was warmed up and ready to go when the Charangueros took the stage. In fact, things got pretty packed up front with fans pushing one another jockeying for a position close to the stage. I decided it was too aggressive for me and backed up a bit to a calmer section of the room. 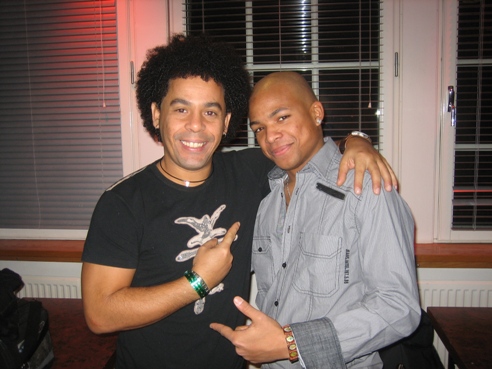 La Charanga began their concert as in the past with an instrumental intro which serves two purposes. First, it offers a chance to see the musicians play solos and demonstrate thier prowess. Second, it serves as a last-minute soundcheck for making final adjustments since the acoustics change when the room is packed with screaming fans. This was followed by a recorded introduction of the bandmembers where we caught our first glimpse of the choreography that has always characterized La Charanga Habanera.

Finally after 15 minutes of introduction the concert exploded into the first number: “Lo que va a partir La Habana”, originally sung with Baby Lores & El Chacal. With timbalero Randy singing and rapping, Lazarito Mengual switched to cover the timbales and el mismísimo David Calzado took over campana. This song is a good example of the Charanga’s timbaton complete with the drum machine playing the typical reggaeton beat during sections of the song.  It’s fairly fast for casino and better suited to dancing despelote or reggaeton.

With a little muele by Calzado, “Lo que va a partir La Habana” segued into the final coro of “Chico caramelo”, a timpop with Dantes on lead. Since his return to La Charanga two years ago, Dantes “El Ricky Ricón” has taken on a large role in the band and now sings lead on most of the hits previously sung by Leoni as well as on three songs from the new CD, No mires la carátula.

As if to assuage the doubts of the hardcore timba fans, they followed this timbaton/timpop with a hardcore timba number “Tú no eres mejor que yo”, from the new album, again with Dantes on lead. One of my friends made the observation that Dantes’ return to the band has brought back some of the sound of the Charanguero mayor period. This song is the opener of the Carátula CD and demonstrates that the band can still lay down some of the hardest timba around. It will satisfy those of you who prefer the Tremendo delirio era.

In an interview with Timba.com Aned mentioned that the fans in Slovenia were asking for songs from the older repertoire, which he said the band really isn’t performing anymore. Even during the potpourri, other than the requisite short version of “Nube pasajera” they never went further back than the Soy cubano, soy popular album. It will be interesting to see if they delve deeper into their  classic repertoire for the US tour since fans in El Yuma may not have kept up with the latest releases.  In any case, in Stockholm the potpourri was “Soy cubano, soy popular”, “Abusadora” and “Nube pasajera” all sung by Dantes. 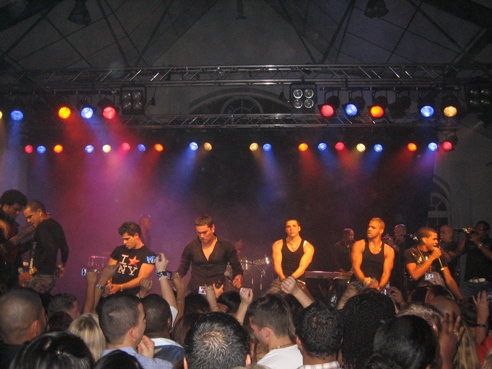 After “Abusadora” David interrupted the walk down memory lane by inserting an estreno, “Hay mujeres”, another serious timba. In this song Aned Mota claims that there are seven women to each man in the world, although the ladies in the audience loudly voiced their disagreement. The coro hay mujeres, pero como hay mujeres, hay mujeres, lo que no hay es money, lo que no hay es soldi is already well-known in timba clubs.

They returned to the potpourri with “Nube pasajera” during which Dantes first threw a glass of water over the audience, but this not being enough for him he followed with an entire pitcher of water. I’m just glad it wasn’t beer. So ladies, my advice is not to spend much time fixing your hair if you plan to be close to the stage.

The second hour of the show began with another éxito from No mires la carátula, the timbaton “Gozando en La Habana”. As most timberos already know, this song has two versions: the international version and the Yuma version. We got the international version of course, but for the US you can expect the version from the album. If you have been to any timba nights over the past year you will recognize the song. It was written by Aned and Randy, and the singers do a tag-team lead, which seems to be standard with the timbatons.

David then went into another long conversation with the audience as a lead-in to “La carátula” sung by Lázaro “Lachy” Maya. The song is about not judging a man by his appearance, but I rather doubt that Lachy has any problems getting dates because of his looks. He has been with the band for about one and a half years now and after initial struggles with the choreography he has settled into his place. More than just a pretty face, Lachy is an excellent singer with a rich voice, and he is also a very nice and down-to-earth guy. Click here to watch a short video interview with Lachy.

Speaking of the choreography, it’s no secret that David has been hiring dancers to work as singers. It is a clear indication of the emphasis that Calzado places on the espetaculo aspect of the concerts. Dantes, Randy, Junior and Heikel did a little dance show to a very fast version of “De película” followed by the Mariah Carey cover where Orlandito danced on his congas…so to speak.

“Baby Junior” finally took lead vocals with his timpop hit “Mentirosa”.  The closing song went to Dantes, this time Leoni’s “Ay amor”. This was when the ladies were invited up for the inevitable cintura contest, which went on for quite a few minutes with both suecas and cubanas. Swedish television was actually filming the concert and after a while the camera woman couldn't resist joining the cintura contest herself. She did an excellent job.

The audience demanded an encore and the Charanga complied with the timbaton “Este es un cañon” originally recorded with Gente D’Zona. As the song went on more and more fans joined the band on stage which soon resembled a dancefloor. 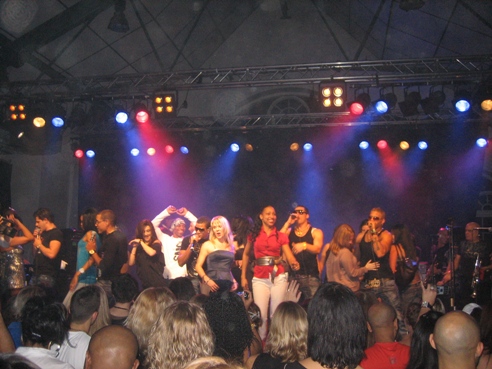 So what is my final verdict? I had a great time and would recommend their concerts even to fans who prefer the older songs. The music in the current show is a mix of timbaton/timpop/timba that is heavy on songs from No mires la carátula, but this doesn't detract from the pleasure that the  espetáculo brings.  I was worried that there would be a more  serious dance show attitude, but the choreographies and the dancing are sexy but still laid-back and with a sense of humor and individual expression by the guys that makes it more fun.  It's a celebration , a two-hour adrenaline rush that will leave you on a 24-hour high.