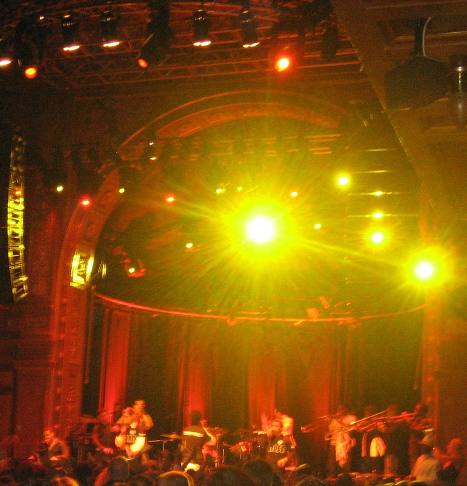 When I heard that the November tour was confirmed I was really hoping that the band would get a chance to play in my hometown this time. When I heard that not only were they going to perform here, but this would be the opening concert of the second European tour, I was both excited and a little nervous. You might think I was worried about the impression that Salsa Mayor would make on the Swedes, but it was rather the opposite. After seeing the fantastic reception Salsa Mayor got in southern Europe on their first tour, I was a little worried that the Swedes, with their reputation for reserve and standoffishness (is that a word?), would be a disappointment to the guys. My fears were unfounded. The Swedish audience kicked butt. But I get ahead of myself. Let's start this story at the beginning.

The concert was nearly a victim of the Italian workers' movement. The day of the concert the band was scheduled to leave Italy at 09:35. That same day there was an airline strike set  to begin at 10:00; no planes would be allowed to lift off after 10:00. Due to delays at the gate, the plane lifted at 09:55. Five minutes later and the concert would have been cancelled. But the Orishas were smiling on us and the band arrived without further incident. We dropped the baggage off at the hotel and went straight to the soundcheck. 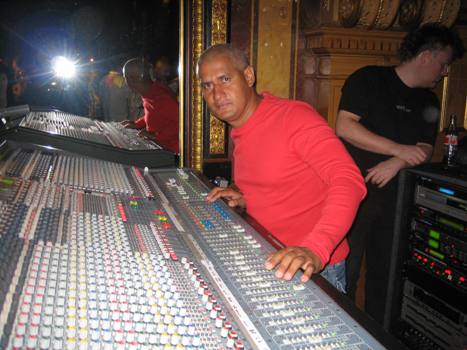 Soundman Vladimir hard at work. Note the gilded mirrors that line the walls, not ideal for concerts, but the audio actually turned out pretty good.

The venue itself deserves a few words. Berns is a large, labyrinthine complex with restaurants, bars, a big gilded room with a stage, a score of smaller rooms suitable for conferences and even it's own 60-room hotel. Built in the 1800s, Berns is located in the upper class part of town. The main hall where the concert was held is absolutely gorgeous. The walls are intricately carved and gilded, there are several huge crystal chandeliers running the length of the room. There are also balconies surrounding the central floor and along the balcony walls are paintings of people who probably were famous at the time the building was made, but I have no clue who they are. Really an incredibly beautiful setting for the concert. 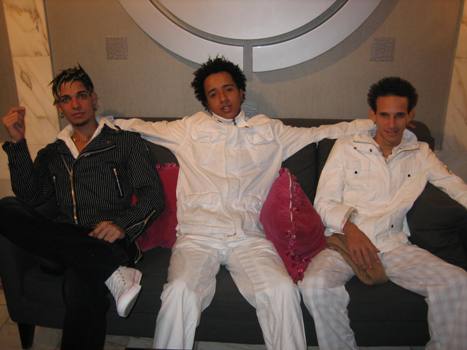 If the general trend during the last tour was blond hair or at least blond, spotted hair, the theme of this tour must be spikes. Of course El Noro has had his trademark blond spikes for some time now. But Ricardito and Jaime were all sporting spikes as well. I was teasing them that it looked like they stuck their fingers in a light socket y cogieron los 440. 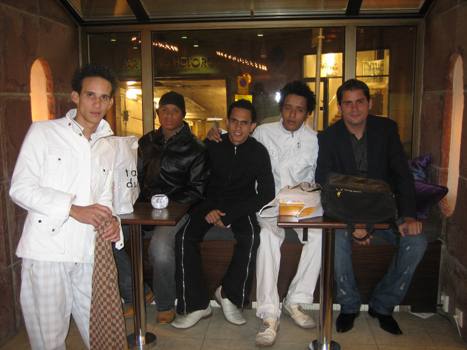 There was some sort of delay before the taxis arrived to take the band back to the venue. So we spent a good hour hanging out in the reception area at the hotel. Suddenly all the guys started pointing out the window and rushing outside. I couldn't figure out what was going on. Then I realized it was snowing. This was the first time that almost any of them had seen snow. 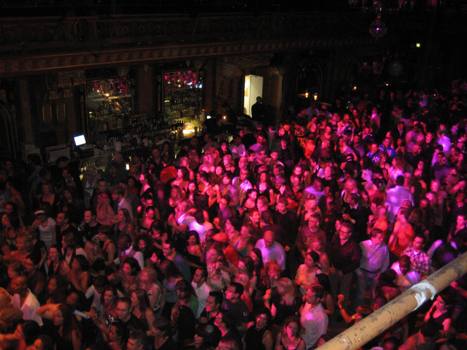 Audience as far as the eye can see

The concert started right around midnight. I was relieved to see that the venue was packed. The best space for dancing casino was at the far back of the room, although a couple of mini-ruedas did form up front during the course of the concert. Most of the audience was crowded up towards the stage. And the Stockholm audience rocked! They sang along, they danced, they interacted with the band. It was really a fun bunch of people and a great ambiance. 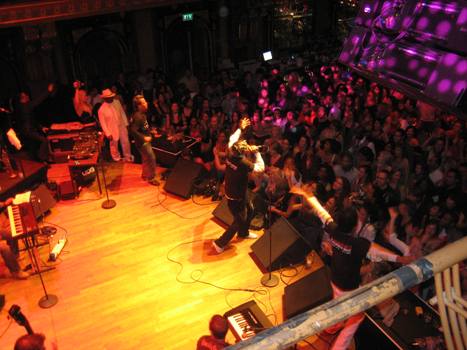 The view from the balcony

As for the playlist, Maykel has changed the opening since the last tour. They start with the intro that you recognize from Live, Desde la Casa de la Música, and just when it sounds like Esto está is starting, they switch to Anda pégate. You have probably heard this song at clubs. It is likely to be the title track of the upcoming studio CD and it is another great dance song. As you can see in the video below, the Stockholm audience already knows it and sang right along. 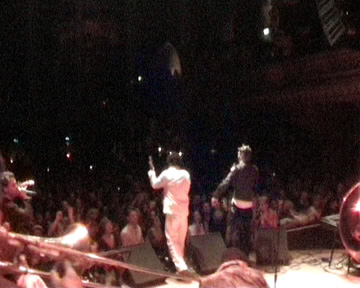 The band has a great new drummer since the last tour. His name is Amaury and Maykel brought him in from Alex d'Lara's group. He is very good, as you might expect from someone who has studied under Roicel Riverón. 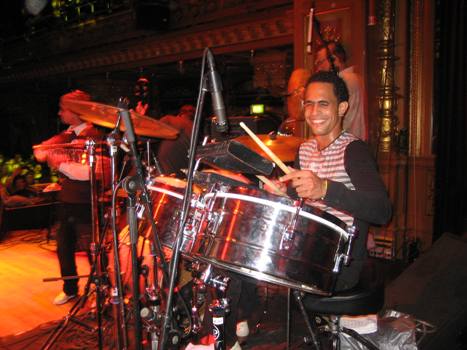 The other new member since their last tour is bassist Orley. He has played in traditional groups prior to joining Salsa Mayor. He plays electric bass as well but prefers baby bass. 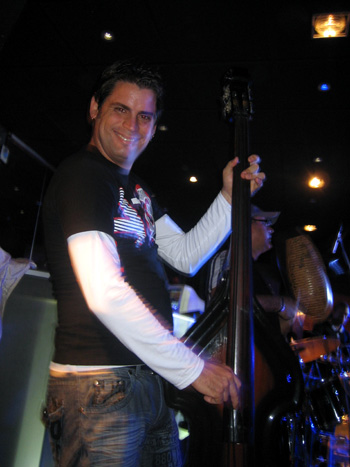 Maykel really focused on the new material in this concert. The second song was La masa, one of the two estrenos on Live. El Noro sings lead and it is one of those songs that instantly wins the audience over with its tumbao. Of course it was already familiar to the fans in Stockholm who have been dancing to it at the clubs for a few months. Ah, and just let me add here that El Noro was the only singer who did not mix up Suecia with Suisa when he said "Esta canción es para todas las tembas de Suecia". Congratulations Noro! 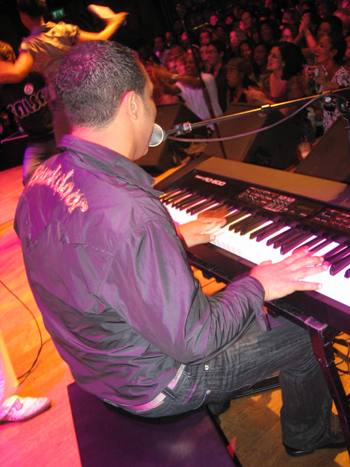 They followed up with Quitándome lo malo, and at some point during this song the singers were given t-shirts by la farandula sueca, whoever or whatever that group is. You'd think I'd know, but I don't. Anyway, they wore the t-shirts for the rest of the concert. Also new since the last tour, Maykel has added a little mambo to Quitándome lo malo with accompanying cute little choreography by the singers. Sorry, no video. 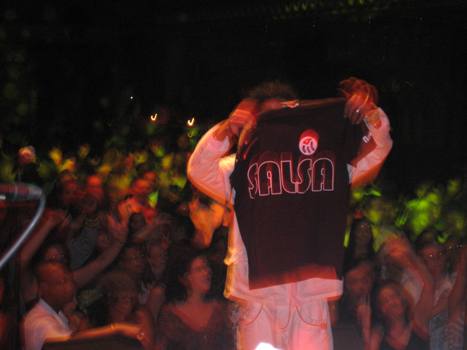 The singers got new t-shirts from la farandula sueca

Fourth came Ella dice, which has become very popular with the people who have heard the demo. During Ella dice Norberto invited four ladies on stage: two Swedes and two Cubanas. They did the traditional despelote contest and in the end their efforts were rewarded with a poster for all contestants and a CD for the winner, who just happened to be a Cubana. 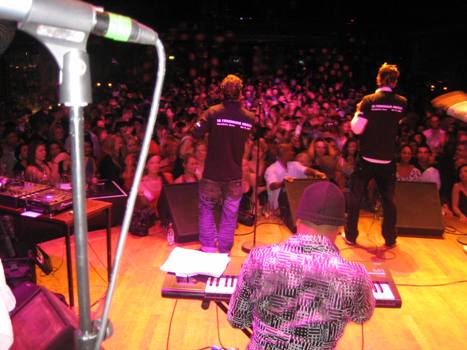 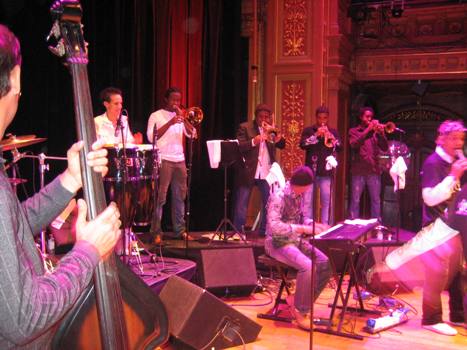 A beautiful stage, but Noro says that what matters is Lo bello por dentro

The second hour of the concert began with Lo bello por dentro, another great song from Recoge y vete. The thing I love about Salsa Mayor concerts is that even though the entire Recoge y vete CD is great as it is, the live versions are so much more hardcore. Just check out the "tremenda guapería" coro at about 3:42 with that heavy percussion in the video below! 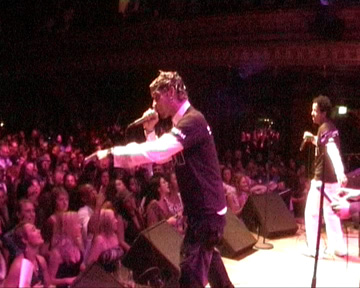 The next two songs in the playlist were Cimarrón, with that live coro that I love "eh tú mira como es, asere cántalo" and Recoge y vete, which is just as popular in Sweden as in every other country. But still Paris is in the lead for sheer madness. 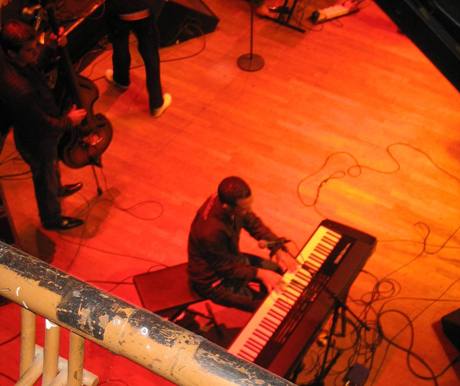 Looking down on Maykel

The final song of the concert was Control the second estreno from Live, Desde la Casa de la Música. This is yet another example of how Salsa Mayor is one of the most hardcore orchestras in timba at the moment. Click on the picture below to watch the "Live, Desde Berns" version. 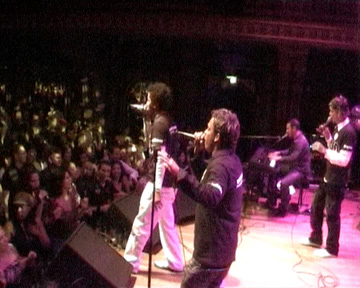 Because the concert had started late the guys were not allowed to continue and the DJs took over again, so there was no encore. But in the days that followed Stockhom's salseros were making comments such as "That was the party of the year". The band also really enjoyed the concert and in a later interview (2007-11-16) in Latina, Italy, when Noro said that the -2° Celcius in Stockholm was abuso, Maykel made the following comment: "But in Sweden there was something very special. There was tremendous heat from the audience so we never felt the cold at any moment. Congratulations Sweden." If you understand Spanish click here to see the actual comment. The full Latina report will be coming later.

I have to say that I am eagerly looking forward to the new CD which they begin recording in January. It should contain, Control, Anda pégate, Ella dice, La masa and who knows what else? Maykel says he has 20 songs ready and just has to decide which ones he wants to use.