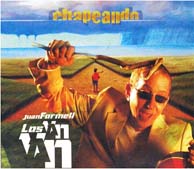 The following is not a review but rather my reflections and personal experiences related to the CD from the perspective of a dancer and vanvanera. I'll leave any official reviews to the musicians at Timba.com.

Chapeando is one of those Timba CDs that seemed to take forever to be released, the official release being at la Tropical on January 7, 2005. As of the beginning of March it is still not readily available for fans, hence this little report.

I happened to be in Cuba at the time of the release and my first opportunity to listen to it came from a roadside quemador. We asked to listen to the CD and a little abuela came out and produced a completely blank CD, which she put in the CD player. "You must have gotten the CDs mixed up", we said when the first song started with the sounds of running water, birds and a little piano and flute. But after 50 seconds we heard the unmistakable sound of Robertón's laughter and knew we'd found the right CD. This was followed by the first coro of the song: Oro mi mama yo co da, oro mi from a song for Yemayá, which reflects the idea that Formell had for the CD.

Fortunately I was able to find the real CD at the airport on my way back to Sweden. The CD cover itself is almost reason enough to buy the CD. In addition to some beautiful artwork, there are 3 short articles written about the group with quite a bit of Afro-Cuban religious reference, one written by Juan Formell himself explaining his ideas about the CD. The cover also contains the lyrics and coros, although not the guías.

If the CD has any weakness it would be that three of the biggest dance hits on the CD, Agua, Anda Ven y Quiéreme and Ven, Ven, Ven, have been floating around for over a year, so they don't feel like "new" songs. On the other hand, the versions on Chapeando are slightly different from the "demo" versions. Most obvious is that Anda Ven y Quiéreme is noticeably slower than the demo version. The other songs have slightly different guías but are on the whole much the same.

It's interesting to note that 4 of the songs were written by the new generation of vanvaneros, Samuel and Cucurucho each having authored two songs. Probably the most unexpected track on the CD is the song Te Recordaremos by Diego el Cigala. It's a surprisingly successful blend of flamenco and salsa, and while it's not likely to be a great dance hit, it does have its dance moments.

With this CD we really get to see what Lele and Yeni are capable of, and they prove that Juan Formell knew what he was doing when he brought them into the orchestra. Anda Ven y Quiéreme has been a favorite among dancers for over a year now, but with Corazón, Lele proves that he has earned his place in Los Van Van. I dance rueda with a group of friends twice a week and everyone sings along with certain lines: ¡Ese corazón me lo llevo yo! ¡Todos que quieren Van Van con las manos pa'cielo! and we all raise our hands in the rueda. It passes the Swedish Rueda test with high marks.

As for Yeni's two songs, the men are all raving about how sexy her voice is. Despues de Todo seems to start out slowly because the cuerpo has 3 verses, but enjoy the lyrics and never fear, you have to wait a bit, but the hardcore section starts up at about 4 minutes: la que pasó pasó está bueno ya, no comentes más ya pasó. Nada also has really amusing lyrics, from a woman's point of view, but due to its cha-cha-fusion feel (there's even a rap section!) it may not be as big among dancers as some of the other songs. Personally, I love it! Ayer por la mañana, dijiste que más tarde..., después llegó la noche y resultó...y como siempre tú...nada. Listen to the way she builds up the intensity in her voice, as if you can feel her anger building up.

And then we have Mayito and Robertón who have now become the "old timers" among the singers. In addition to Agua, which we all know by heart, Mayito sings No Pides mas Presta'o and El Montuno, and he sings the heck out of them. All the songs are excellent, but I especially love El Montuno which sort of describes how Juan Formell was able to revitalize popular Cuban dance music. Just listen to Mayito's guías! He swept the Timba.com awards in the lead singer category, and when you listen to these songs you can see why. And check out the solos by Cucurucho and Samuel!

Robertón has the honor of singing the title track, to which his deep voice is perfectly suited. In addition he sings Ven, Ven, Ven and La Buena have been around for a while and are already classics. But I think my favorite of Robertón's songs on this CD is Por Qué no Te Enamoras, originally a Candido Fabré song.

With the exception of the beginning of Chapeando, Te Recordaremos and Nada, the CD is packed with killer dance songs. As always Los Van Van combines faster and slower songs, and as with older songs such as De Igual a Igual and Llévala a Tu Vacilón, even the slower songs have such an intensity that they give the dancers the adrenaline kick they are seeking. You can really get your groove on.

In closing I can only say that I hope the CD soon becomes available to everyone, and don't be surprised if Los Van Van find themselves nominated for another Grammy! Click on the links below for some short, 96kbps mp3 clips from some of the new songs.