Our first tumbao is a very famous one, and a perfect example of the most critical timba piano innovation – the idea that the piano tumbao be a “hook” by which the song can be identified and that contributes greatly to the song’s popularity. If you play the above tumbao, No me mires 1a, for any timba fan, the person will immediately know which song it’s from.

Examining the hands separately reveals another major timba piano innovation: there are three places where the left hand adds an extra note between two right hand notes, a technique never used before timba. No one seems to know who came up with this idea first, but as we’ll see shortly, Melón was the first to use it as a central part of his style. 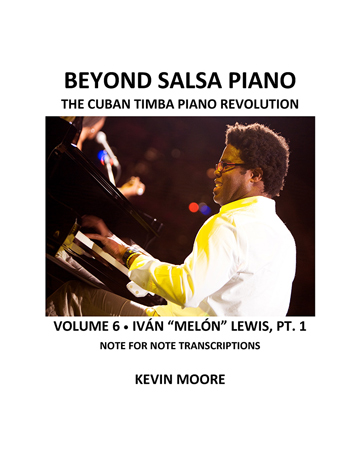 About Iván "Melón" Lewis - A central player in one of the most important bands of the entire timba era, the Issac Delgado Group of 1995-1998. He and bassist Alain Pérez arguably took the art of tumbao playing to its highest level of creativity and sophistication to date. All of the timba piano innovations detailed in Volume 5 can be found in Melón's work and some of them originated with him.