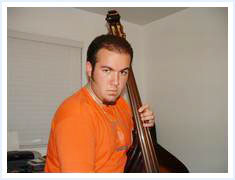 Born to Armenian parents, bassist Abe Gumroyan has established himself as the first call bassist for the latin music scene in the beautiful city of Las Vegas.....all at the age of 21!!! Abe's love of Cuban music was embedded in him by listening to records of Los Van Van & Orquesta Revé from the moment he was born which belonged to his father (who also has a deep love for Cuban music) which he bought in Soviet Russia in the 70s. Abe still has these plastic LP's to this day. Abe and other fellow Cuban musicians in Las Vegas have also propelled the popularity of timba to the masses in Las Vegas to dizzying heights. Equally adept on the electric bass & Ampeg baby bass, Abe brings a ferocious groove on any project he involves himself in. His talents have also led him to other oppurtunities outside the timba scene such as more traditional acts which include Frankie Morales & Tito Puente Jr. Abe cites Alain Pérez & Feliciano Arango has his "Bass Heroes" in Timba. "Those two men are the gods of timba bass playing....words can't describe the profound influence they have had on me.....God bless them". Abe is currently playing w/ex-Manolín conguero, Alexis "Mipa" Cuesta regularly in Las Vegas