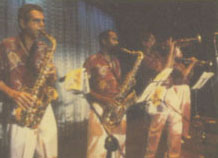 Tragically, Rolando passed away in early 2007 due to complications after a kidney operation. You can read his short autobiography below. [Michelle White]

I worked in the Matanzas provice with different big-bands that put on shows in the 70s and 80s. IN 1981 I arrived in Havana where I began with a great Cuban jazz group directed by a great musician named Felipe Dulzaides (pianist Fallecido)

"Pérez" may be the most common Cuban apellido, so the fact that Rolando's parents shared the same last name is not that unusual but it did earn him the apodo (nickname) of "Pérez Pérez". He joined NG La Banda just as the Timba revolution began and stayed throughout their glory years. Check out his solo on "La Bruja". He's now touring with Cubanismo. [Kevin Moore]