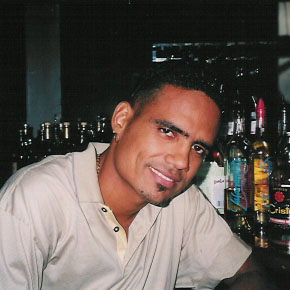 Aned “Cinturita” Mota Centeno “born in Havana under the sign of Aries, March 25th, 1974, and...well, here we are in March again”. He studied a bit of economy “because you've gotta know how to pay the bills". Later, about 1995, after his obligatory year of military service, he took a course in modeling, but he gave it up because "I didn't like it much there and right here is where I see myself”.

“I first started to try my handing at singing in "Los Chicos de la Salsa", together with my cousin Liena Hernández, now the trombonist of Anacaona. I liked music -- it was something new to me -- and I got the fever to sing.” - and not only Aned. It seems that his older brother, inspired by Aned's success, has also decided to take up singing. “I went from "Los Chicos" to "La Farandula", a new band, in 1997 and I was with them until '98, when I became part of this family, La Charanga Habanera”.

He also sang on Calixto Oviedo's “La recompensa” in 2000, y he made his debut as a composer on the new Charanga Habanera disc, “with a song that I dedicated to the professor”. The song is called “El abuelo Carmelo”.

About his guías he told me "I like to work on my guías, especially the rhymes and rhythms, and I always get a lot of guidance from the 'motor' of the group, Sergio David Calzado".

Aned dance moves on stage have earned him the very approriate nickname, “Cinturita”. On the dance floor he's an artist who knows his job and does it well. Away from the stage he's the same regular guy I'm known for so long, except that he's become a happy father, with two kids, and a wife who's also a famous singer, Haila María Mompié, of Bamboleo, and later Azúcar Negra. [Majela Serrano]