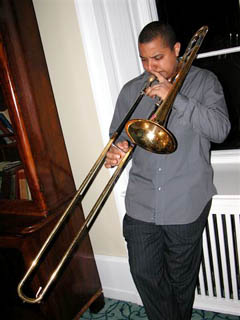 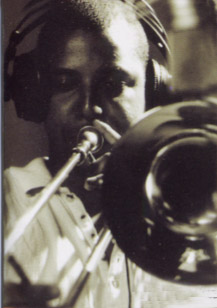 Carlos Pérez is one of the best trombonists of the younger generation. His solid foundation in music allowed him to study at the ENA while at the same time working as a trombonist in Cabaret Parisién of the Hotel Nacional, and later to join T con E, led by Lázaro González, Sr., the father of the leader of Bamboleo. It was with T con E that Carlos did his first foreign tour. Later he joined Tamayito y su Salsa AM, just before he started playing with Paulito FG. His last group before leaving Cuba was a project led by Augusto Enríquez.

Currently, he lives in Denmark where he is one of the founding members of Grupo Danson, a group that is very popular in Europe.  The song "Mi música" from their first CD won the prize for best world music song in denmark. Carlos has also played with with Calixto Oviedo y La Recompensa. among others. He's also been very much in demand as a studio musician in Havana recently, playing with Sello LA, Issac Delgado and others. [Majela Serrano]