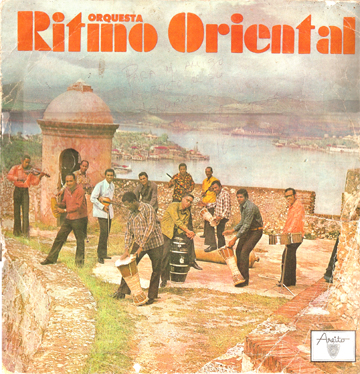 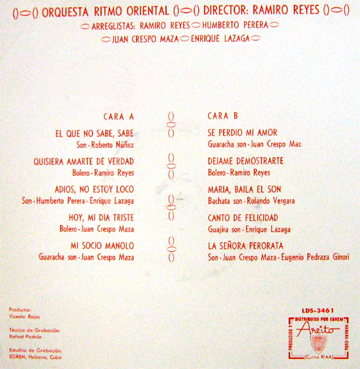 It was recorded in two sessions. Five of the songs, (shown above in red), had already been recorded, but apparently never released, at the CA-718 session, and were covered in the previous section Now we move on to the songs that were recorded for the first time in 1974.

This arrangement has an almost textbook example of con efecto that's easy to hear:

This is also one of the few Ritmo Oriental songs that has an unusual piano tumbao (or one that's prominent in the mix for that matter). After the usual breakdown to bass and percussion, the piano enters with a tumbao that mimics the rhythm of the "walking bass" we heard in Se perdio el amor. Piano tumbaos are primarily composed of offbeats, but this one has none at all (0x0x 0x0x 0x0x 0x0x).

notes: The opening tumbao is related melodically to the coro and also has the unusual quality (for this genre) of not hitting the downbeat. At the end of this excerpt is the transitional to a strange but beautiful section at a much slower tempo. The transition back to speed at the beginning of our second excerpt leads to the first section we've encountered from any our three bands that's based on the bombo-ponche bass tumbao (xxx0 xx0x). The chord progression, I - IV - V - IV, is the most common in Latin music -- La bamba, Guantanamera, Pare cochero ... on and on. One could say that I - IV - V - IV is to Latin music what the 12-bar blues is to North American music. Humberto improvises all around it, showing a mastery of a style he almost never used with la Ritmo (at least at this early point). The 70s were almost completely dominated by melodic guajeo-based bass tumbaos, and almost every track was in 2-3 clave. This changed drastically in the 80s, but remember - we're still in 1974.