The Music of Ritmo Oriental - Yo bailo de todo Analysis

Yo bailo de todo - The Tumbaos

notes: Tumbao 1 has two very rare characteristics. It's the only up-tempo songo we've thus far encountered that's in 3-2 clave, and, although it's not a straight bombo-ponche tumbao, it doesn't hit the downbeat of the 2-side. It marks the clave by hitting the backbeat of the 2-side and the anticipation of the 3-side (underlined notes). It would be more than reasonable at this point for the reader to postulate that the often mentioned tendency of the bass tumbaos we've studied to start on the downbeat has less to do with marking the 2-side and more to do with marking the beginning of the harmonic phrase. After all, it just so happens that every song we've studied so far has been in 2-3!

When we get to the 80s, all will be revealed, but for now, let's turn to some 3-2 timba anthems for a quick sanity check:

So there's no doubt that the tendency of the the downbeat to mark the 2-side is independent of clave direction (although I could have also quoted a few LVV and Manolín examples which essentially play the clave, thus marking the 3-side with the downbeat). In any case, -- for now -- let's just follow along with our timeline and see how the denouement unfolds.

notes: This song demonstrates another great arrangement technique that timba bands like Charanga Habanera would later embrace -- coro sections which answer each other. Coro 1 is que toquen que toquen, yo bailo de todo. It later gets shortened, in the traditional way, to simply yo bailo de todo. Then, at about 3:10, coro 2 enters with baila baila José, which is then answered by the continuation of yo bailo de todo. At this point the bass tumbao also changes. The first phrase has an R&B flavor and the second phrase returns to the feeling of tumbao 1.

notes: Tumbao 3 stops marking the clave and goes to a bombo-ponche pattern which Humberto varies constantly, and brilliantly. The pattern shown above is just a template. Listen to the MIDI example to hear the variations. When coro 1 returns, so does tumbao 1. 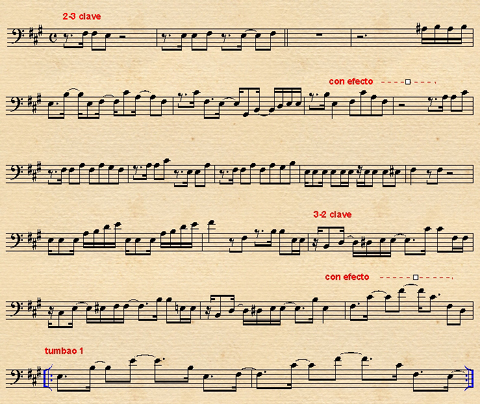 In 1975, this may have been the most sophisticated and sublime Cuban popular music bass performance ever recorded, and it was seldom if ever equalled by anyone other than Perera himself until the arrival of Feliciano Arango, Pedro Pablo and Alain Pérez in the 90s.

There are three audio clips: the actual recording, a MIDI transcription, at the original tempo, with a tempo map to approximate the two instances of con efecto, and a second MIDI excerpt which plays the transcription as written, in slow motion, without efecto.

Humberto deftly switches from accompanist to soloist and back as he weaves his way through the bloques and several tumbao ideas, playing each one with multiple variations.

Note the "clave license clave change" at bar 16 - if you play clave from the beginning, you'll have to play the 3-side twice in a row to stay in sync with the band. 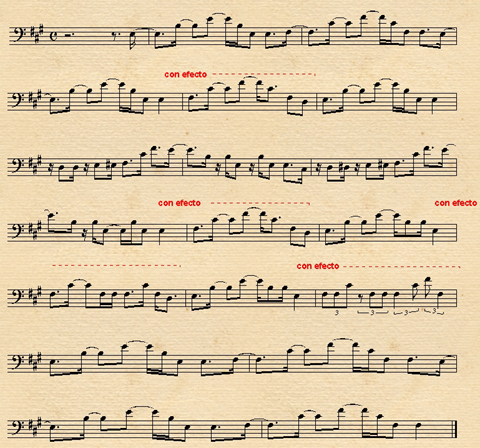 This is one of the great bloque passages in Cuban music and a textbook example of la Ritmo's con efecto style. After some variations on tumbao 1 (only the basic tumbao is written) comes a series of three con efecto bloques, each one funkier than the last, culminating in a folkloric triplet figure and a return to tumbao 1.