The Music of Ritmo Oriental - The Art of The Bloque 2 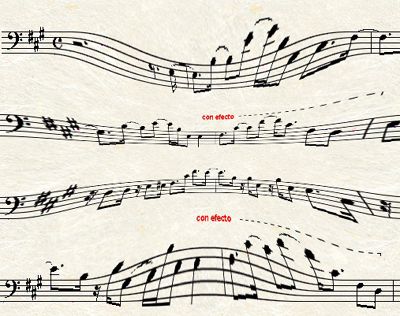 An even more complex time warp occurs at the second bloque.

This one required 11 MIDI tempo changes, three of which are again simply pauses as the musicians wait for the strings and flute to bring them back in.

There's also a subtle clave anomaly in this passage, but until we get a much clearer recording, it would be counterproductive to get too obsessed with it. I've left the MIDI clave out of the ambiguous portions of the MIDI version and I suspect la Ritmo left out of the actual recording for the same reason -- it shall remain a mystery for now!

These elaborate exercises in MIDI madness are intended to make two points:

1) The unique rhythmic style of Ritmo Oriental results from the whole band collectively, and frequently, changing tempo in dramatic fashion.

2) This level of tempo sophistication can (eventually!) be programmed such that a computer can approximate it, but cannot be written out in a way that humans can be expected to execute it without extensive rehearsal and years of playing together until the whole band begins to operate as a single rhythmic organism.

If I were to apply this treatment to every Ritmo Oriental bloque, several more Cuban genres would probably come and go before I could finish this article, so from here on I'll simply show how each rhythm would look without the "efecto" applied and only occasionally add efecto to the MIDI examples.

Our final excerpt from Sabroseao con la Ritmo showcases a different type of bloque. Half of the band continues playing at normal tempo and the other half plays the bloque. It's almost as if there's tug-of-war going on with the tempo, with the bloque faction trying to play it con efecto while the bass, piano and violins battle to hold the original tempo. Before leaving this excerpt, also listen to the changes in the conga marcha.