It was probably more than a coincidence that shortly after Humberto Perera's arrival, Ritmo Oriental released the 4-song EP (CA 468; EPA 6238) that gives us our first glimpse at the bold new Ritmo Oriental of the 70s. We don't know the exact year, but it was either 1970 or 1971, and the big hit was Sabroseao con la Ritmo. 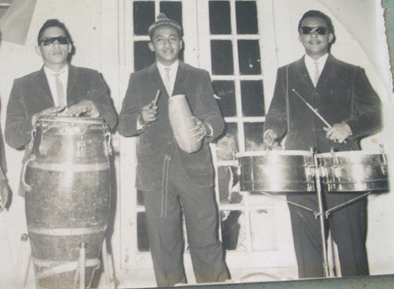 notes: There's only one bass tumbao in this song and it's very much in keeping with the style we've encountered in Los Van Van's 1969 recordings -- a strong downbeat followed by a melodic, clave-aligned series of offbeats and upbeats. Its only unusual feature is that, like Los momis, it has no ponche (xxxx xx0x). In fact, Sabroseao is rhythmically equivalent to Los momis except for the addition of the downbeat.

The tempo, which reaches 111 bpm, is also in keeping with Los Van Van's first songo tracks -- significantly faster than charanga, although not quite as fast as Los Van Van's faster 1969 recordings, and only hinting at the breakneck speeds that all three of our groups would reach by the mid-70s.

Timba's most common tempo range is from the high 80s to the low 100s.

So, in many ways, Sabroseao con la Ritmo could be thought of as the application of some of the stylistic innovations of Los Van Van and Pello el Afrokán to a genre perfected by Fajardo and Aragón.

Ah, but there's so much more to it than that. It's not simply that Ritmo Oriental used faster tempos that its predecessors -- it also used multiple tempos in the same song and switched between them in extraordinarily sophisticated ways. We'll be spending a lot of time studying this practice, which the bandmembers called "con efecto", but first we need to explore la Ritmo's reinvention of one of Arsenio Rodríguez' favorite devices: the bloque