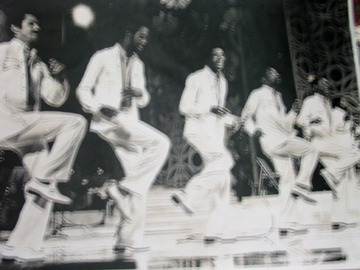 The introduction features an unusual conga pattern with elements of the Puerto Rican bomba sicá rhythm that would later be very influential in timba. The bomba percussion pattern is clave neutral. In fact, everything in the introduction is clave neutral except for motivo part played by the bass, strings and flute. If the bass part were a timba kick drum pattern, it would be contraclave and indicate 2-3, but since there's no clave to be "contra" to, we'd have to say this introduction is in 3-2, although the rest of the song, like almost all the songs of this era, is in 2-3 rumba clave.

One of the main hooks of the arrangement is the punchy bass pickup that leads into the A-section of the cuerpo, which features a violin guajeo that's almost pure clave.

Humberto plays variations of this bass tumbao throughout the arrangement, with the only major departure being the B-section of the cuerpo, which begins as if it's going to be another walking bass line, but reverts to a slightly more legato version of tumbao 1 on the 3-side. Still, combined with the I - vi chord progression, it's enough to give the B-section a distinctly R&B flavor.

After the A and B sections repeat, we come to the first breakdown. Juan Crespo Maza's hilarious vocal rap on this section never fails to make me smile.

Like most of Ritmo Oriental's breakdowns this one removes the piano and strings, but retains the bass. In timba, we'll find the opposite to be true, with far-reaching implications in terms of dancing. As we've pointed out, Los Van Van and Irakere were already occasionally experimenting with this pivotal idea of removing the bass.

Coro 1 is very similar to the A-section of the cuerpo. The bass tumbao is different enough to call it tumbao 1b, but the string guajeo is completely different and very inspired.

A short set of con efecto bloques leads to the second breakdown, which is also a gem.The bass part is almost the same and we'll cover it a little later as tumbao 1c, but the most interesting parts of the breakdown are the congas and güiro. Claro plays a marcha with no open tones (often called masacote), with slaps on the offbeats of the third beat:

Once again we find Claro hinting at rhythms which would become common practice in the timba era. The part Claro played on Sabroseao con la Ritmo was a precursor of bota. The key characteristic of bota is slaps or tones on the offbeats of beats 2 and 4 (xxxx x0x0 xxxx x0x0)

Claro's part on the breakdown of Y se baila así, which moves the two accentuated offbeats to main beat 3, predates an even more common timba marcha, used by Charanga Habanera, Bamboleo, Issac and others as a change of pace during cuerpos and breakdowns where the singer talks to the crowd. It's sometimes called "charanga" and sometimes called "cha-onda". The term cha-onda comes from the style that Orquesta Aragón developed in the mid-70s when they briefly moved away from traditional charanga in response to Van Van's songo and la Ritmo's "nueva onda".

Lazaga's güiro part on the second breakdown is also wonderful. The part itself is a sped up variation on an early danzón rhythm called baqueteo, which according to Peñalosa holds the distinction of being the first clave-aligned rhythm to have been published in written music.

The most exciting aspect of Lazaga's playing here - as it was on Mi socio Manolo - is the way he subtly, but powerfully, brings the tempo up from 119 to 124 bpm. Gollin and Holland recall seeing the band live and being astounded at Lazaga's ability to "conduct" the band with his güiro and body language.

The last coro of Y se baila así is a classic: Juana no me quiere porque yo no sé bailar ("my baby don't love me cuz I cain't dance"). By this time the tempo has peaked out at 127 and Humberto has trimmed a few notes from his tumbao accordingly. Meanwhile, the strings have switched from a melodic approach to a very rhythmic one which uses only two pitches

Before leaving Y se baila así, let's review tumbaos 1a, 1b and 1c, along with their corresponding string guajeos:

It's really the same bass tumbao, but Humberto makes subtle but clever changes to accomodate the markedly different string parts. It's tricky to avoid clashes and redundancies because bass and string parts in this type of music are based on the same rhythmic blueprint. To demonstrate, let's try the experiment of swapping the rhythms of the bass and strings in tumbao 1c:

To make the swapped file, I kept the notes basically the same but made the bass play the violin rhythm and made the violins plays the bass rhythm. It doesn't swing quite as much, but each part still sounds typical.

As explained in the "Sea of Holes" chapter, the dense texture of Cuban music is possible because certain instruments play in the spaces left open by others. Some instruments do this naturally, like bell and congas, or clave and kick drum. But making the bass, strings and piano lock together as well as they do in la Ritmo is an amazing achievement.