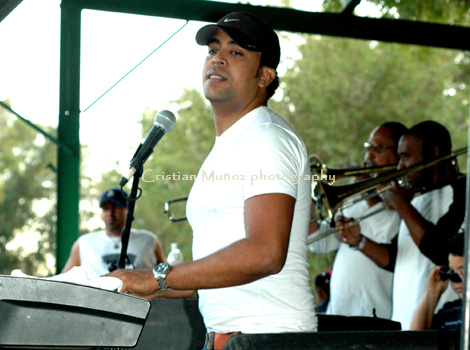 The name "Valdés" is very common, but in this case it's very difficult to carry on such a great musical tradition.

From his grandfather Bebo, to his aunt Mayra Caridad, his mother Miriam, and the most famous of all, his uncle Chucho Valdés, the talent has been handed down from generation to generation. And although Roberto is the youngest, it certainly doesn't mean he's the least talented!

He studied at the "Guillermo Tomás" school, and then at "Amadeo Roldán" until the second year of the middle level.

If my memory doesn't fail me, he played synth in "Los Chicos de la Salsa", and he later took over for Tirso Duarte as pianist and musical director.

His biggest interest has always been jazz, and he's continued playing it simultaneously with his many jobs as a timbero.

Although only 24, he's played with five of Cuba's most famous bands. After playing with the two Charangas he went to Issac Delgado, then Paulito F.G. and finally, in 2001, he replaced the legendary Pupy Pedroso in Los Van Van.

Cucurucho played some synth, wrote some arrangements, and, along with David Calzado, co-wrote the opening song of Charanga Habanera's most recent album, Chan Chan Charanga.

Here's hoping that he calms down and stays for a while with Los Van Van! [Majela Serrano]