The first album was released in early 1974 as Areíto LD-3420. EGREM released the same 8 tracks, with the same catalog number, with at least three different covers!

The text "Teatro Amadeo Roldán - Recital" has led the incorrect conclusion that the album was recorded live. Even more subversively confusing is the back cover of the second LP above. Perhaps EGREM was inspired by the Beatles' "Paul is dead" cover art chicanery. 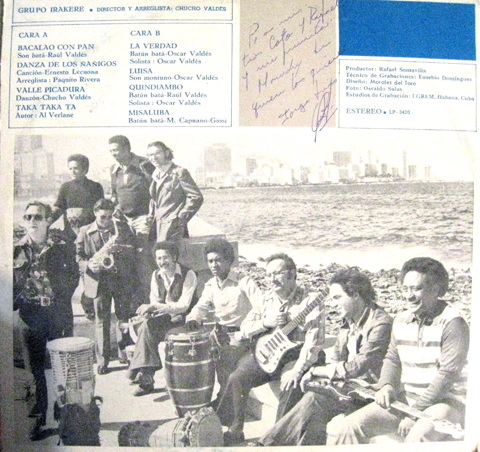 The three guys at the top are trumpeter Jorge Varona, Chucho, and saxophonist Carlos Averhoff. So far, so good, but below them, from left to right, we have four musicians who, according to Chucho himself, didn't play on the album: Enrique Pla (according to Chucho the drummer was Bernardo García), a very svelte Arturo Sandoval (holding Paquito's saxophone to further confuse us), Paquito D'Rivera (holding Arturo's trumpet), and El Niño, who hadn't yet joined when the tracks were recorded. To the right are guitarist Carlos Emilio Morales, bassist Carlos del Puerto, and singer/percussionist Oscar Valdés.

The 8 tracks were reissued on the CD La colección, Vol. 1, and on multiple compilations and foreign vinyl reissues. In our Roots of Timba section we review our two favorite tracks: Bacalao con pan and Quindiambo. The latter, paired with La verdad, appears on one of the few 45s we've been able to find by Irakere. Oddly, another, 6902, pairs the La verdad with Valle de la picadura. the only other single we know of was 7529, from about 1982, with Los caramelos and Que se sepa yo soy do la habana. There must be more singles and EPs out there, and if you know of one, please send an email! We're also very interested in confirming that the 45s have the same recordings as the LP. We think the do, but around that time, Los Van Van made a habit or doing separate recording sessions for their singles and albums.