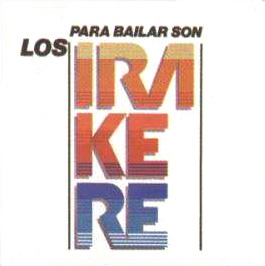 This is the only volume of EGREM's "colección" that was never released on EGREM vinyl. Instead, it was licensed to the Tierrazo label. If you can, please send us a photo of the back, or of the record label itself.

The most important tracks from a "roots of timba" point of view are another great studio version Ese atrevimiento, also with gear changes, and El Tosco's No quiero confusión -- a bit change from his early charts from Los Van Van -- featuring brass writing that anticipates the "metales de terror" approach he later championed with NG La Banda. Confusión is also one of the early up-tempo dance tracks to break with the long-standing tendency towards 2-3 clave. Try singing the coro "no quiero confusión" while you clap clave. Another solid track is Arsenio's Dile a Catalina, setting the stage for Issac and Melón's 1997 version.