Wednesday July 28, 2004 - Interview with David Calzado in English
The interview by Claudia D'ammassa from Milan has now been translated to English.

Also the names of the songs for the upcoming Charanga Light have been corrected in the lyrics section, and it has been confirmed that the rapero on Charanga Light is Lázaro "Mayami" Díaz, who also did the rap on the Charanga Habanera version of Chan Chan. Mayami is the new singer with Manolito y su trabuco.

Wednesday July 21, 2004 - Interview with David Calzado and Photos from Milan
At the festival LatinoAmericando in Milan, Claudia D'ammassa interviewed David Calzado for the Italian site Meeting Latino and we thank them for allowing us to publish the interview here at Timba.com as well. Right now it is in Spanish but we will have an English translation up soon as well. And photos are the universal language, so check out the photos that Claudia sent us from the Milan concert.

Charanga Light
The latest information says the name of the new CD will be Charanga Light, not Charanga Suave. I guess this is a reference to the fact that it's not as "heavy" as a normal Charanga Habanera CD.

Tuesday July 20, 2004 - Sneak Preview of Charanga Habanera's Upcoming CD
In an interview with Timba.com in February, David Calzado said that the new CD will be called Charanga Suave and will be released in the summer. Well it's summer now and no official release yet. I expect that we will have to wait for the band to finish its summer tour. But in response to questions in the guestbook, we can offer you a little sneak preview of some of what you can expect from the new CD including 2 MP3 clips. 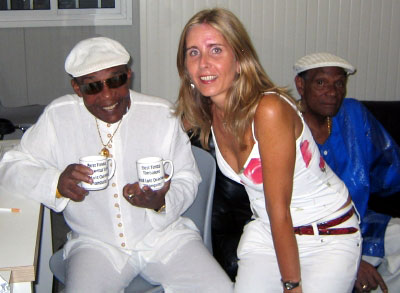 Saturday July 17, 2004 - El Ricky in the US?
We hear that Dantes' success in Italy has caught the eye of a promoter in the US who is interested in bringing Dantes y Su Bomba to Florida for a concert tour. With the current visa situation for Cuban musicians, I don't know if Dantes will succeed where other have failed, but we can always hope. Other countries he will likely be visiting soon include Canada, Argentina, Spain and Peru. But this will have to be sometime after the summer because he is already committed to a summer tour of Italy. We will keep you updated.
Para leer sus noticias en español has click aquí.

Tuesday July 6, 2004 - Azúcar Negra begins Canadian Tour Tomorrow!
So all you timba-starved North Americans have something fantastic to look forward to in July. Their first concert is tomorrow at Liquor Store Cabaret in Québec City. This seems to be as close as Cuban bands can get to the US, well other than Cuba I guess, so do like I do and take a timba trip to another country! Yes, I'm in debt, but I'm happy!

And in Europe we have festivals, festivals, festivals....
We are at the peak of the festival and concert season here in Europe and as a friend who is visiting Cuba right now put it: Best Place to See Timba Live: Europe. So keep an eye on the Tours section which is being updated almost daily with new dates/cancellations. Here's a sample of some of the Festivals going on this month:

Check the links because we don't have pages for everything that's happening. For example on July 17 in Milan there will be a Cuban Grammy - special project featuring Eliades Ochoa, Haila, Changuito and Tata Güines, under the artistic direction of David Calzado.

Thursday July 1, 2004 - ¡Que Pupy Tiene Candela!
The long awaited Eurpean tour of Pupy y Los Que Son Son is now in full swing and Timba.com was on hand to enjoy it and to give César "Pupy" Pedroso his Timba.com prize for Best Timba Pianist. 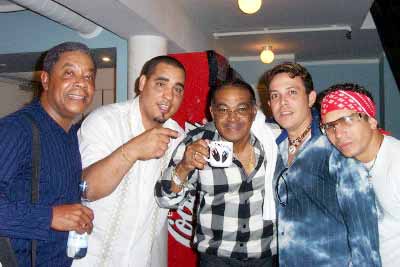