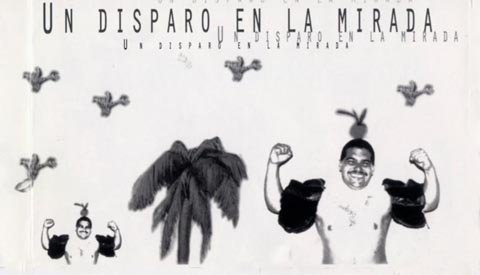 "Alejandro y Rember" are two mysterious medical student/composers who co-wrote several songs with David Calzado and later provided Charanga Forever with a great song called "Mi mecánica". So far, we haven't been able to learn much more about them or their present whereabouts, but their writing is very good.

The introduction to "Un disparo" is a fascinating miniature composition. After the ambiguous opening figure, the horns come in with a very straightforward sounding melody, but it's displaced by a half a beat! The first note of the horns, if you're not careful, (or should I say "not Cuban"?) has a strong tendency to sound like the downbeat of beat 1, but in fact it's the upbeat of beat 4. Another beautiful touch, if you listen carefully, is the synth, up an octave, repeating the introductory figure over and over as the section develops. [audio example 16]

The short, melodic cuerpo makes a smooth and powerful transition into the album's dominant minor funk groove by way of a spirited interchange between Sombrilla (his other nickname is "Mayito") and the coro, leading into a great bloque. [audio example 17] What an amazing range of musical emotions this section spans! A beautiful creative touch is the way the coro walks the fence between rap and melody on "pa' que? pa' que Mayito?"

The first coro is half melodic and half rapped, and has two points of structural interest -- it leaves small holes within the coro itself for Sombrilla to fill and it adds one extra "no sé de donde son" prior to the first (and only the first) of his three full length guías. These guías are so inspired that we need to cover each one!

Sombrilla's first line is a very cool variation on what would have been the coro's second line, but listen to the soulful, bluesy inflections on "se mantienen".

After a few exchanges with the coro, Sombrilla's second guía is a truly inspired hook that ramps up the rhythmic energy of the track in a big way.

In the holes of the next coro, he echoes the coristas' phrases and adds blues inflections before going into his third guía which hits the old "diablo en música" blues note on "desesperes" and then brings the whole section to a great climax with "yo te lo voy a cantar".

The next two coros are entirely rapped. It's hip to hate rap in many circles, but it's hard to imagine even the harshest critics of rap music not being moved by this album. Each rap segment is prepared by, followed by, and enveloped in the most exquisite music, allowing the listener to revel in the rhythmic power of the spoken word without sacrificing the joy of music in the process. Listen to the phrase "mírala como se mueve". (at the end of example 20) For that matter, listen to the speeches of Martin Luther King or the soliloquies of Shakespeare. The rhythmic qualities and inflections of speech have a huge expressive range. The trick is to incorporate them without diluting the magic of the music itself. It's all too easy to go too far and spoil the result, and lesser Timba, inspired by this very album, has often been quite guilty of this type of excess.

The Cubans have always been fascinated by American rap music. From NG La Banda's early experiments to the sophisticated and polished rap of groups like "Orishas" and "Obsesión", they've tried, with quite a bit of success, to fuse the rhythmic phrasing and inflections of black American rap with Cuban Spanish and Cuban topics. But the "rap" of "Tremendo delirio" is an entirely different type of music altogether which owes very little to the Americans other than the basic idea of replacing singing with rhythmic speech. It's extremely Cuban in a very natural and unpretentious way. Listen to Sombrilla's short rap guía which introduces the third coro:

It's impossible to imagine an American rapper using this type of rhythmic phrasing. Charanga Habanera also retains the coro/guía structure, keeps the tumbao going to balance the absence of melody in the voices, and rather than use a repetitive drum machine groove, the percussion is live, constantly changing, and full of clever ideas such as the panned snare drum "gunshot" figure in the above examples.

Note: There's also a "boom remix" of this song appended to the end of the album which does in fact use a drum machine groove with the obligatory disco kick drum. It was apparently thrown together by Calzado and the singers in Spain as a marketing ploy. The track is not without its virtues -- the intro features a very nice piano part. [audio example 23] For a while the band used it as background for the opening choreography of their stage show. For our purposes here, we consider the creative flow of the album to climax and end with the eleventh track, and consider this disco version to be a "bonus track" such as those that are now included at the ends of most classic reissues.