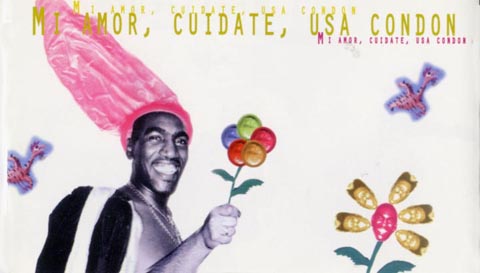 The original Charanga Habanera had no idea that their August 1997 concert on the Malecón would be their last, nor that "Tremendo delirio" would be their last album, but their innate knack for dramatic timing produced a sensational finale in both cases. At La Piragua, they arrived by helicopter into a sea of screaming fans and television cameras, and they concluded their incredible four album run with no less of a spectacular flourish. "Usa condón" is the big payoff, the final climax of both the album and of the original Charanga Habanera, and it delivers that climax with an all-consuming vengeance. There's a certain symmetry in the flow of the last two albums. The third begins with "Nube pasajera" and this one ends with the one track powerful enough to balance it. Even after hundreds of listenings, I can't listen to either one without experiencing the most incredible, heart-pounding rush of adrenaline -- completely beyond the descriptive range of the printed or spoken word, in either language.

Ironically, "Usa condón" began life as an obligatory public service advertisement to counsel the youth of Cuba on the dangers of AIDS and the virtues of safe sex. But for some reason, just as it did with Azúcar Negra's powerhouse arrangement of "Almas disfrazadas", this unhip but life-threateningly relevant topic inspired the creation of a spectacular piece of music. "Usa condón" is a masterpiece of precision arranging. Its four minutes and seven seconds contain not one wasted note -- every sound produced by the fourteen musicians is critical. Each section delivers its emotional knockout punch and then succinctly and dramatically prepares the way for the one that follows it.

Like "Nube pasajera", the introductory tumbao is so unusual and seductive that it's possible to hear it completely wrong and still be hypnotized by it. Try dancing or counting along with the introduction and see if you wind up in the right place when the coro comes in! [audio example 62] At the end of our Clave Analysis article is a special section with written music and audio examples to explain this.

The transition to the horn intro is particularly clever harmonically. The coristas have been singing "ah, me tienes sin cuidado", in a 3-part harmonization which sounds very minor against the F# minor accompaniment. To get to the relative major of A, Calzado simply removes everything but the voices, and without the F# in the bass, they suddenly sound as if they've modulated to the major key although they haven't changed a note! It's a subtle but ingenious nuance. [audio example 62b] Another nice touch is the way the band exits, as it entered, on the classic timba backbeat kick drum pattern.

Lozada and Calzado's 40 second cuerpo has a concise and graceful melody and several harmonic hooks, but the dominant feature is a spirited bloque as the second verse begins. Lozada, (and the güiro, bongó and congas), continue as if all is normal while the bass, horns, keyboards and timbales play a fierce "3 against 4" cross-rhythm, alternating long and short durations and ascending the pentatonic scale to an exhilarating trumpet shake at the top. A few lines later, Lozada's voice smoothly and urgently morphs from song to speech with "de esta manera, mami" and the opening tumbao roars back in. Like the denouement of an Agatha Christie novel, the rhythmic mysteries of the opening are suddenly and dramatically revealed as the striking rumba clave accents of the piano tumbao leap out and whip the rhythm forward [audio example 63].

Lozada raps out his message over four cycles and then a funky Lola-esque bloque signals a change in the tumbao and he crosses back over to melody. [audio example 64].

The coro changes behind the horns and then comes a passage worthy of the Beatles in their prime -- the synth and bass, in massive tenths, like a huge pipe organ, play an epic descending scale that sounds like a cross between the children's piano song "Heart and Soul" and some raging Shostakovich symphony lodged in Calzado's subconscious from his days in the Russian-style conservatories. Riding over the top is Lozada, in full sermon now, and he finds the razor's edge between speech and melody and stretches it to the breaking point in each direction, with the horns and coristas leaping in whenever he takes a breath. [audio example 65]

The flow of creativity doesn't let up. At the breakdown which introduces the next coro, the piano switches to its third tumbao, with a three note descending hook which alternates between the minor and blues scales -- the blues note always seeming to pop through the other parts at the perfect moment. The coristas come to the forefront now and they've saved for last several of the album's strongest rapped coros. The syncopated rhythms of the rapping become hooks unto themselves.

and its rhythm pattern:

On the final repetition, the last line is cut off by the transition into an even stronger coro, with the rhythm section ratcheting up the energy by turning the pickup notes into a gut-wrenching bloque.

and its addictively fiery rhythm pattern:

Next in this series of perfectly timed climaxes, the brass turn the offbeat pickups into one of the simplest but most effective mambos in Timba, which in turn climaxes with the lead trumpet squeezing out an almost impossibly high concert A and then the coristas end the album as they began it, a capella, with the single word "es".