At Moe's Alley. See you there.

UPDATE: They were on fire! Like a band from Cuba, the years of rehearsing and arranging have resulted in an overwhelming arsenal of gears and bloques. Murray Low has got that crazy Rolando Luna finger action going and I don't think I've heard any Cuban drummer play the snare drum more creatively than Carlos Caro who was completely off the hook tonight. Look for a photo gallery and maybe even a bit of video from Tom. His fancy new still camera actually takes better video than most dedicated videocams. Also, mark down Dec. 11 at Sweet's Ballroom in Oakland. Jesús didn't give too many details, but it sounds like a major event. This could be a great new Bay Area venue.

Among the complaints about the old timba.com were the difficulty of finding things and the huge pages that required so much scrolling. To address this, we've added the new INDICE-TABLE OF CONTENTS FEATURE. When an article is long, it sprouts a Table of Contents to the right, so you can quickly find your way around. For example, here's the TOC from Tom Ehrlich's massive new exhibit on the Latin Side of the San José Jazz Festival: 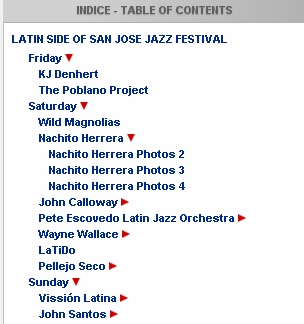