¡Avísale a Teté que la Ritmo está en la calle! - listen to audio example
Teté, Enrique Lazaga's wife and Eduardo Lazaga's mother, has sadly passed away, but la Ritmo immortalized her in song with this unforgettable passage. In Cuban slang, if a band is "en la calle" it means that they're on fire and everyone "on the street" is singing their songs. For example, in 2001, it was rumored that Van Van was falling apart, and when they came back strong, one of Lele Jr.'s first guías defiantly announced "to'el mundo tá diciendo ... que van van está en la calle otra vez." In the case of Ahora sí, voy a gozar there was no question then and there's no question now, and the amazing coro 2 section seals the deal. After suddenly surging into a folkloric 12/8 feel to introduce the new coro, another dumbfounding series of con efecto bloques unfolds, and Humberto's 12/8 variations are themselves well worth writing out and studying carefully. 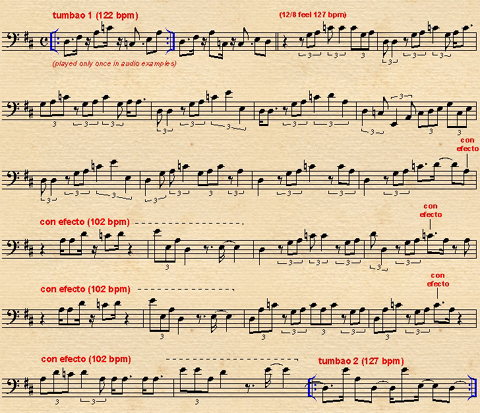 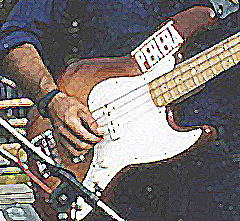 The bloque section ends with tumbao 2, back in 4/4 time, and this time, it's a bombo-ponche tumbao that marks the clave with the quinto pulse on the 3-side (underlined):

The next section continues the idea of the clave-aligned bombo-ponche tumbao against coro 2, adding a funky Jamersonesque upward run every time the coro gets to que la Ritmo está en la calle, almost as if to accentuate the lyric by demostrating one of the new and exciting elements of La Ritmo's new "en la calle" style.

Also note the upward sequence of 4ths that Humberto throws in the 4th time through (it's in both the audio and MIDI versions):

For the next coro, Humberto comes up with a very unusual tumbao that's predictive of some of the sparse bass tumbaos of timba.

There are still more variations after this -- as we said, this track is a semester's study for any serious bassist. 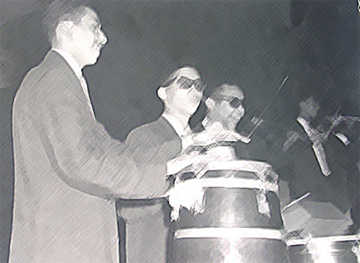 This one is just a chachachá version of the old Matamoros standard, but beautifully played and sung, with interesting harmonic substitutions, and of course Humberto finds ways to tastefully inject a bit of funk and leave his stamp on the proceedings. Here are two ways to notate the fancier version that he plays several times over the course of the track:

Many find the second example easier to read, expecially in light of Humberto's double-time figure, and in actual practice it would be written this way, but the first example is technically correct in terms of where the main beats fall.

Like hemlines and hairstyles, tumbaos have their fashion trends. The early 70s were a period where nearly every tumbao included the downbeat of the 2-side, but as we get closer to the 80s, we find more and more examples of bombo-ponche tumbaos, with no downbeats at all. When the harmony changes, the bass note changes first, on the ponche, and continues to ring across the downbeat.

A pure bombo-ponche tumbao has the same rhythm on each side of the clave, but Un matrimonio feliz is a hybrid which avoids the downbeat but still marks the clave melodically like a typical 70s tumbao. It's also an excellent example of the "singing" bass tumbaos that Arsenio pioneered. If you were to ask someone how this song goes, the person might well answer you by singing this distinct and catchy bassline. Hence, Perera varies it much less. However, by the end of the track, he's back to his old tricks, and his brief pedal tone on the 6th degree of the scale is a particularly thrilling way to end our survey of this incredible album. 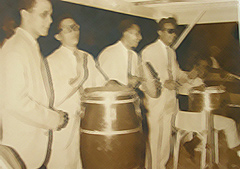 Before returning to the parallel universe of Los Van Van, we should briefly touch on Ritmo Oriental's mysterious CA1210 session, probably from 1976 and probably the only recordings la Ritmo made that year.

These were apparently never included on an LP, but a copy of Enséñame tu baile Lola somehow came into my possession, so it must've been included on an EGREM compilation LP. It's similar in many ways to Un matrimonio feliz. The other three tracks remain a mystery. Hopefully someone reading this will find them!