The Roots of Timba - Part II - Meanwhile, in another part of town ...

After Ponte para las cosas but before Ana, Irakere released another batún-batá single. The A-side, La verdad, approached the batá-conga hybrid similarly to Bacalao con pan, but the B-side, Quindiambo, was quite different, while still called batún-bata. 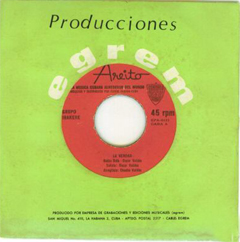 notes: Among Irakere's early dance tracks, La verdad and Takatakatá were similar rhythmically to Bacalao con pan, but Quindiambo was quite different, using a batá rhythm which sounds more like Olokún or a 4/4 version of Obaloke than the Iyesá-inspired approach of the others. Like Bacalao, it's written by Raúl Valdés. We think this mysterious but talented writer is the brother of singer/batalero Oscar Valdés (not directly related to Chucho). If there are any Valdés genealogists out there, please contact us, as there's a pressing need for a Valdés family tree that sorts out the likes of Chucho, Lázaro, Jeáns, Cucurucho, Afredito, Oscar, Raúl, Bebo, Yeni, Miguelito et al.

Tumbao 1 and tumbao 2 are both in 3-2 although the clave isn't being directly stated. It's tempting to think of them as being in 2-3 because of the strong downbeat and the fact that the rhythm of tumbao 2 is identical to the archetypical contraclave timba kick drum pattern for 2-3. However, the coro itself is so strongly 3-2 that it tips the scale. Tumbao 3 is unequivocally in 2-3 with a standard bombo-ponche bassline and a torrid adaptation of a rumba coro that dates back even before Los Muñequitos used iti n the 50s on the classic track La gitana, (source): para la niña y pa' la señora. The Irakere version simultaneously looks back to the classic guaguancó track and forward to the timba of the 90s. Compare Oscar Valdés spirited vocal interjections to this excerpt from el Médico de la Salsa (source). Irakere's most important contribution to timba may well be the raw emotional power unleased by Quindiambo and Bacalao con pan.