Sabroseao con la Ritmo, the "missing link" in the development of Ritmo Oriental's arranging style, also appears to mark a shift in the style of their conguero, Juan Claro Bravo.

Throughout most of the track he plays variations of the generic conga tumbao:

But during the middle section of Sabroseao, Juan Claro plays a marcha, now commonly called bota, which was used extensively by Los Van Van and later become extremely important in the timba of Paulito FG, Manolito y su Trabuco and others.

By the time La Ritmo recorded again, Claro had all but abandoned the standard marcha for the flexible new guaguancó-based approach that he would use throughout the rest of his career. Here's a typical example from la Ritmo's Baile del azúcar:

For further study, The Tomás Cruz Conga Method, Volume II (co-authored by myself, Orlando Fiol and Mike Gerald) has a full chapter devoted to "songo" with written and video tutorials on a wide variety of Los Van Van and Ritmo Oriental marchas as well as some of Tomasito's own creations.

Meanwhile, Irakere's first conguero, Lázaro "Tato" Alfonso, had his own take on the re-rumbafication of the congas in Cuban pop. Irakere called their version batún-batá. Tato played the congas with one hand and a bell with the other while Oscar Valdés played an interlocking part on an Iyá. We'll have more on this a little later.

With the "perfect storm" upon us, let's try once again to figure out year it is! We know that Los Van Van Volume I came out in late 1969, and that the next LP by each our three groups didn't come out until 1974. All we have to go on are the EPA numbers of the undated singles and EPs. 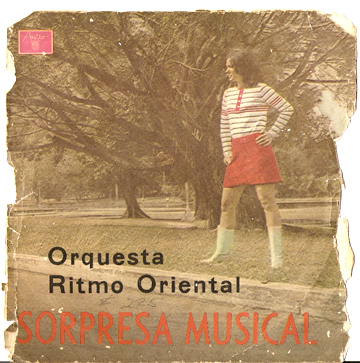 Draw your own conclusions -- my guesses are that Sabroseao was either late 1970 or early 1971, and that it was in 1972 that Los Van Van released its first truly great track - Aquí se enciende la candela -- a breakthrough whose lyrical reference to "lighting the fire" is apropo in many ways.