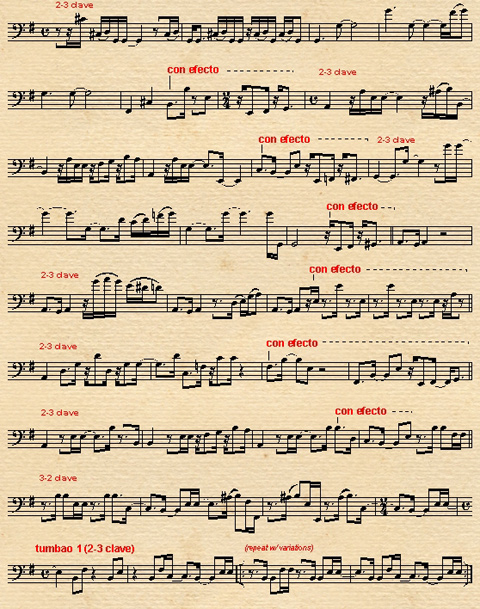 This arrangement twists the clave in every imaginable way. Let's start with the last two lines of the transcription above (MIDI version). First of all, forget about the clave and just listen to Juan Crespo's unthinkably funky vocal part! Okay ... now that you've got your adrenaline pumping, this is what I call a "New York clave change" -- not because it was developed in New York, but because most New York musicians are violently opposed to any other method of changing clave direction. The next to last line starts in 3-2, and the bar of 2/4 allows tumbao 1 to start in 2-3 without interrupted the flow of the clave. Try clapping clave along with this slow-motion MIDI version.

If you were expecting the next example to demonstrate a "clave license" clave change, guess again! Remember, this is la Ritmo. There's plenty of "clave license" but no clave change! This audio excerpt (MIDI version) starts at the beginning of the second line of the transcription above. Again we encounter a bar of 2/4. but this time it disrupts the flow of the clave instead of preserving it! The clave direction is 2-3 before and after the odd bar! So instead creating an quirky asymmetrical break to avoid breaking the clave, la Ritmo breaks the clave to allow a quirky asymmetrical break! The quirky break is an artistic end unto itself rather than a means to an end.

To show that this "como sea" approach to clave runs throughout the history of Cuban music, let's take a quick peak into the future -- Los Van Van's Agua (2004). This exquisite 4-clave bass tumbao, in 3-2 clave, is used for the intro, parts of the cuerpo, and coro 1:

Now listen to the bloque-laden transition from the cuerpo to coro 1. Since the cuerpo and coro 1 are both in 3-2, there's no need for a bar of 2/4 and an asymmetrical bloque to flip the clave around, but this brilliant, edge-of-your-seat asymmetrical bloque is its own raison d être, so, just like the second line of Qué rico bailo yo, the arranger uses clave license without using a clave change. 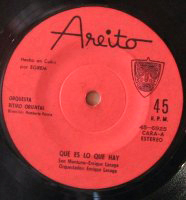 Qué es lo que hay is yet another great lost vinyl track from this most neglected of Ritmo Oriental LPs. Each bass tumbao is a thematically unique 2-clave creation -- the first with a bright "singing" quality and the second adding a heavy Jamerson-R&B flavor.

The bloque section that separates tumbaos 1 & 2 offers a unique twist on a trademark of La Ritmo's style that began with Yo bailo de todo -- bloques that come in groups of three. Usually, as in Yo bailo, each successive iteration would become more complex, but Qué es lo que hay turns the formula around, removing complexities from the original phrase until all that's left are four success upbeats.

This is a particularly good example of the value of the x & 0 approach. If you blur your eyes a little you can literally see the geometric pattern of Lazaga's rhythmic logic. The first bloque is two upbeats, followed by a distinctive figure. The second adds an upbeat, and repeats what's left of the previous figure. The third adds yet another upbeat, erasing the original figure entirely! It's a type of "addition by subtraction". Here it is in full notation with the con efecto tempo changes shown in red.

After a series of coros and guías over tumbao 2, Lazaga's arrangment employs a device that would be used frequently in the 90s, especially by Manolito y su Trabuco. It's a studio recording, but the singer breaks it down as if to talk to the crowd. At this point, Humberto plays a rhythmic pedal tone.

The term "pedal" has many meanings in music. It was originally used in baroque organ music. The lowest notes of a pipe organ are played by pedals, and the composer/organist would often create magnificent climaxes by holding down a long, low tone with the pedal while continuing to play changing harmonies with the hands.(source)

In the late 90s timba of Paulito FG, "pedal" was a very specific gear (source) in which the bells and conga marcha would stop and the bass would play long sustained low notes. Unlike an organ pedal, however, the bass notes usually change to fit the harmonies in the timba "pedal" gear.

In la Ritmo's case, using a repeated pitch to play a tumbao rhythm didn't indicate any particular gear -- the other instruments continued normally. It was the prerogative of the bassist to play a pedal when he wanted to add intensity. Another such device in the bassist's bag of tricks, as we mentioned earlier, is to play the 6th degree of the scale under the tonic chord. For example, the basic chord progression of the second half of Qué es lo que hay is C - F (V - I), but when Humberto periodically plays D under the F chord, he single-handedly changes the overall harmony to C - Dmi (V - vi, or you may even hear it as bVII - i). The pianist doesn't have to know this is coming -- the D in the bass automatically changes his F chord to a Dm7. In classical music this is called a "deceptive cadence" because the listener is lulled into expecting a resolution to the tonic but unexpectedly winds up in the relative minor. These days, bassists of all the Latin subgenres use this device frequently.

Humberto really puts on a master class in the closing moments of this track. Let's use "The Amazing Slowdowner" to bring bring his part up an octave and expose some of the finer details.

The next two tracks have very different cuerpos but by the midway point, each of them ends up in the same basic groove: 120-130 bpm, 2-3 rumba clave, a V - I chord progression, and a similar approach by Humberto. He uses the both the rising R&B figure and the "deceptive cadence" on all three songs.

The first tumbao has some improvisation in the bass, but on the second Humberto really cuts loose, playing a different variation nearly every time, including the relative minor trick, the upward R&B run and many other interesting nuances.

If La Ritmo was less influenced by North American music than LVV or Irakere, they nevertheless became, with the cuerpo of Yo traigo panetela, the first Cuban band to utilize that most characteristic and unequivocally original musical form of the Yuma -- the 12-bar blues. They had hinted at it in La chica mamey, but Panetela is a pure textbook blues:

As shocking as the blues sounds in this context, la Ritmo makes it their own and this became one of the more popular songs of this period. When the cuerpo transitions into the montuno section, we're back to the same groove as the previous two songs.