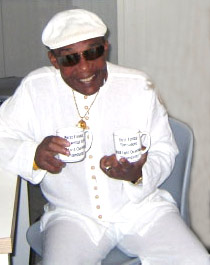 Changuito's contributions to Cuban music can't be overestimated. He was one of the first Cuban drumset players to combine aspects of jazz and funk drumming with traditional Cuban comparsa, batá and timbal rhythms. He used the drum kit both melodically and polyphonically and was a master at spicing up slower rhythms with double-time variations. In addition to his performances and recordings, he's also been the musical padrino to generation after generation of students at Havana's Escuela Nacional de los Artes (la ENA), teaching timba giants such as Tomasito Cruz, Alexis "Pututi I" Arce and many others.

La historia del songo is a must-have instructional video featuring Changuito and Rebeca Mauleón-Santana. By the end, you still don't quite know what songo is, and its history remains murky, but after each viewing, while you may not have learned what you set out to learn, you've nevertheless learned something else of equal or greater value. It's a priceless experience to hear Changuito chat in a relaxed setting and to watch the lovingly overdubbed rhythmic examples. There are also several full performances featuring Changuito playing with a group that includes Giovanni Hidalgo.

Changuito begins by demonstrating the original drum part used by his predecessor, Blas Egües, on the first Van Van LP:

Changuito joined Los Van Van in 1970, and in the second section of the video he explains the alterations he made to the basic songo groove:

The most significant change, from our timbacentric point of view, was moving the kick drum from the downbeat to the bombos.

For our purposes, La historia del songo is the most immediately relevant of Changuito's many educational products, but equally fascinating is Evolution of the Tumbadoras, in which he and Giovanni Hidalgo sit down amidst a sea of congas and interview each other on a wide range of topics. A Master's Approach to the Timbales is a method book-audio CD package co-written by Chuck Silverman, whose website also includes several online "lessons" with Changuito. Finally, there are several videos featuring extended duets between Changuito and Giovanni.