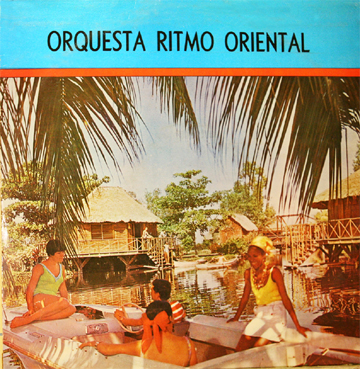 If someone were to publish a coffee table book on Cuban album cover art, it will be short and sweet. The cover shown above, for example, was so lovely that EGREM, in its infinite wisdom, decided to use it for several different albums, while using several covers to release the 11 songs recorded at the epic CA-1098-1099 sessions in 1975: 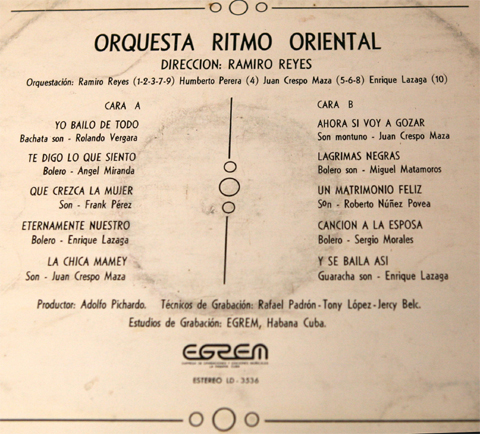 Of the five boleros, only one, the profoundly unusual cover of Miguel Matamoros' classic Lágrimas negras, has ever been released on CD or even unofficially distributed in the form of a bootleg vinyl transfer. In other words, we've never heard them, and not for lack of trying! Our best guess is that Te digo lo que siento, Eternamente nuestro, Canción a la esposa and Amor, no dejes qu te olvide were all traditional boleros, too unremarkable to have made it onto La historia de la Ritmo, Vol. 1, which combines the remaining seven tracks with the non-boleros of the sessions described earlier in our Sigue bailando Manolo section to create the greatest "twofer" this side of Aquí el que baila gana.

notes: Sabroseao con la Ritmo introduced la Ritmo's new style, and Mi socio Manolo was their first huge hit, but Yo bailo de todo became, for Ritmo Oriental, what De la Habana is for Paulito FG or La bola for Manolín -- their signature song and the inevitable finale to every concert.

We'll tackle this rhythmic masterpiece in three sections: the tumbaos, the cuerpo, and the famous bloque section.