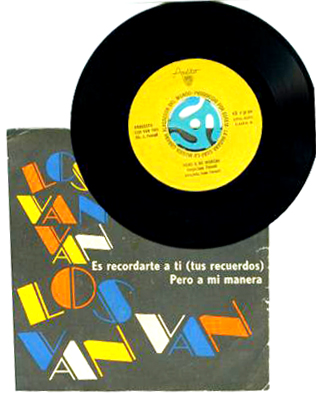 CD availability: LVV Vol. II "Tránsito" "Rosetta Stone" bootleg
*Those with asterisks were recorded once in Havana for the single and re-recorded in Spain for Tránsito

notes: One can only imagine how the opening of Pero a mi manera must have sounded to Habaneros when it debuted on Radio Taíno in 1971 or 72. That excerpt is from the original single. Here's the same passage from the album version which we'll use for the rest of the excerpts - recorded in Spain, probably in early 1974. The introduction juxtaposes Changuito's swirling new rhythms and against a static harmony consisting of a single suspended triad which lasts 4 claves and continues into beginning of a strange and beautiful cuerpo which marks Formell's graduation from copying North American pop hooks to creating new ones of his own. The second cuerpo section uses a much more typical chord progression, but before it can become predictable, the voices come out of nowhere with a cathartic flash of inspiration.

Perhaps the most unusual and original Cuban cuerpo since Tintorera ya llegó is followed by an equally striking montuno section with so many interesting features that it's easier to describe them in a list:

1) The coro itself is a powerful and original hook.

2) While it lasts only 2 claves, it manages to convincingly modulate back and forth between the keys of C and A, creating an unresolved tension that allows it to be repeated over and over like the encore vamp of a stadium rock concert. In fact, from the point the coro enters, the addictive chord progression repeats until the song fades out.

3) There are no guías! In these early recordings, Formell avoided the call and response vocals that are so central to almost all Latin music.

4) As the coro is repeated, the orchestration changes in a way that looks forward to the ultimate goal of our 3-volume study: the "gear changes" of timba. Just as the introduction holds the harmony static in order to showcase variations in Changuito's drumming, the montuno section repeats the coro 12 times and creates interest with the following rhythmic scheme:

The B-side of Pero a mi manera was Es recordarte a ti, a bolero which can be found on the "Rosetta Stone" compilation described above. It sounds like a cross between and old-fashioned Cuban bolero and a Stax/Volt ballad, but if you listen with a discerning ear, you'll hear details in the bass playing and harmonies that shed light on Formell's master plan to reinvent not only up-tempo dance music, but ballads as well.