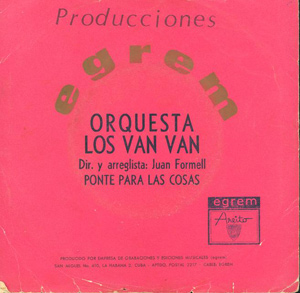 notes: By the early 1970s, Formell had progressed from eclectic experimentation with North American pop to a full mastery of the form. Ponte para las cosas delivers several transcendental moments of pop music genius, and, to my ear, represents the peak of this first phase of LVV history.

The main tumbao, once and for all, adds to the Cuban harmonic palette the most distinguishing feature of late-60s rock & roll -- resolving backwards around the circle of 5ths -- in this case, I - V - bVII - IV (Bb - F - Ab - Eb).

The rhythm of the bass tumbao appears to be a typical variation on the songo formula we've already described, but this one is also an early example of Formell's tendency to play "contraclave".

The first 5 notes are 3-2 son clave verbatim, but the song, like all early Van Van, is in 2-3. Playing "contraclave" against the 2-side is very common, but playing the rhythm of the 2-side against the 3-side (note the underlined pulse) creates an unexpected and very addictive type of tension -- one which we'll hear in some of the kick drum patterns of Samuel Formell and others in the late 90s (e.g., in Te pone la cabeza mala, listen for the kick drum figure 0x0x 0x0x against the 3-side, just before "y a la gente de Los Estados Unidos"), and in some of the more unusual bass tumbaos of Alain Pérez, such as Sandunguita and Amigo Juan. (The latter is in 3-2, so the contraclave figure comes at the beginning of the phrase. Listen for the jamblock answering the bass with the 2-side of clave).

If the contraclave effect is subtle in the first tumbao of Ponte para las cosas, the third tumbao shines the spotlight on it and makes it one of the principal hooks of the arrangement. Also note that the tumbao is 3 claves long, adding to the unresolved mood which makes the listener want to hear the progression repeated over and over. This addictive perpetual chord progression is another device that Formell appropriated from the best North American pop of the era.

A very unusual feature of the main tumbao is Changuito's kick drum playing. It's the only example I've ever found, before or since, of frequently placing the kick on the anticipation before the 3-side, but it fits perfectly with the arrangement -- yet another example of Changuito's endless rhythmic creativity during this phase.

Formell's songwriting is consistently brilliant here -- every section is thoroughly original and emotionally compelling. Using beautiful counterpoint in the strings to make some very unusual harmonies sound natural, the bridge tumbao (tumbao 2) reverses the polarity of the main tumbao and becomes strongly "con clave", with both bass and kick hammering out the 2-side, rock-style, and the R&B rhythmic figure of Pero que falta displaced from the second to the third beat.

Remember: the clave of Cuban music and the "backbeat you can't lose it" of rock & roll are descendants of the same African ancestors. The 2-side of the clave is nothing more than the backbeat, and the hardest hard rock backbeat is nothing more than the 2-side played very emphatically on both sides. Bo Diddley and his New Orleans compadres applied the 3-side emphatically on both sides. Soul and funk rely on the 2-side and use the 3-side for spice. Nuyorican salsa turns the strict alteration of 2 & 3 into a religion. And in Cuba? An infamous Charanga Habanera coro puts it best:

As with the earlier song, the coro is repeated multiple times without guías -- "rock anthem" style -- with the variation and dramatic arc being supplied by the constantly changing accompaniment and counterpoint. It's not really a case of timba "gears" because the percussion is treated as a unit and the changes are brought about by layering the non-percussion elements back in -- first just voices, then a counter-melody in the strings, then the electric piano tumbao. When the bass tumbao enters, the voices drop out to showcase the exquisite 3-part counterpoint of the accompaniment parts:

The voices return with a shortened version of the coro, this time accompanied only by a sparse and aggresive drum beat:

Again, notice how "North American" the 2-side sounds only to return to rumba for the second half of the phrase.

The B-side of Ponte para las cosas is No puedo vivir another mystery song that we know nothing about. If you come across EPA-6334, grab it!