Tumbao Habana's long-awaited CD, Mambo duro, is finally available to the general public. The CD was supposed to be released in the summer of 2009 but was delayed. It was available this fall in France but it wasn't until December that it came out in the rest of the world. We will have a full CD review soon but for the moment I will say that it has some killer tracks on it such as my personal favorite "Padrino", the title track "Mambo duro" and a new version of the beautiful anthem "A la familia cubana", this time as a duet with guest singer Alexander Abreu.

As with past CDs, bandleader Pascualito Cabrejas has put together an album with a mix of music styles ranging from timba to son to bachata to ballad, which makes this a CD you can take with you to "latin" parties since it has a little something for everyone. Stay tuned for the full review. in the meantime here is the track list.

The first show is SOLD OUT so a second show has been added for Charanga Habanera at SOBs Saturday night. Click here for tickets.

SOB's website show another band playing an earlier show at 8pm but the CH show (at 1:00 a.m.) is definitely happening. Get your ticket now or you'll be llorando en Nueva York!

Bay Area son band Pellejo Seco has a new album, La idea, and will be playing tracks from it at Yoshi's in Oakland next Tuesday, January 12. The new album includes a special session recorded with members of Septeto Nacional last month. 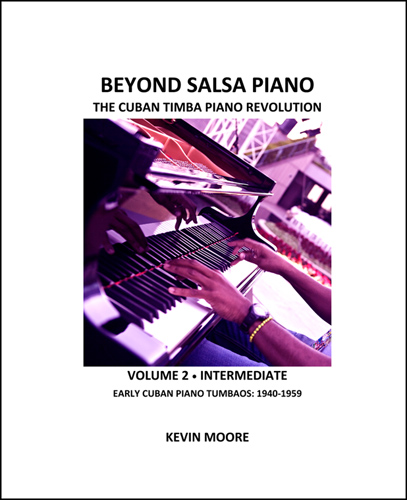 The audio and digital download versions of the second volume of Beyond Salsa Piano are now available on LPM.

For a preview of the contents, including audio and notation examples, click here. This one covers the emergence of the piano in Cuba, including the music of Arcaño, Cachao, Beny Moré, Celia Cruz, Aragón, et al. It ends with the Cuban Revolution. Volumes 3 and 4 will get us from that revolution to the timba revolution.

Meanwhile, as many of you know, I've appointed myself guinea pig for Amazon's brave new world of on-demand publishing, and they're torturing the guinea pig! Imagine my shock after days of proofing Volume 2 when I tried to upload it and discovered that they had discontinued the page size they'd told me to use in the first place! I'll spare you the gory details, but here's the short version. Volume 1 is still available here, for $15 in full color. However, it will very soon disappear and be unavailable in hard-copy for a couple weeks, and when it comes back, it will be $20 and the interior will be black and white. It will also be slightly smaller in dimensions. So if you want the soon-to-be-ophaned color version, get it now, but be warned that it will be replaced and the new one will be the same size as the rest of the series. So if you want your collection to match, wait a few weeks, but if you want color, for $5 less, this is the last chance. It's too bad, because the color interior was going to be great for the timba volumes, but their rapidly changing policies made it impossible. The LPM digital versions will continue to be in color however.

Sorry to keep changing my strategy, but somebody has to figure out how this stuff works, and when you self-publish your book, you'll know exactly where to come for advice! Thanks to all for your extreme patience and don't worry - the timba stuff is really coming soon. The next four volumes are essentially done except for the formatting and proofreading. And the free online version has some Melón and other crazy timba to keep your fingers busy.