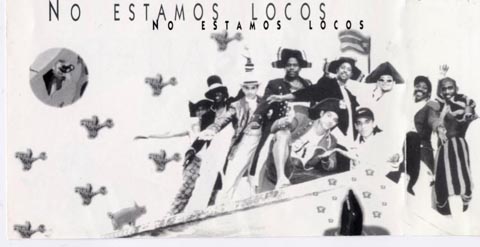 Like Kike Veneno's "Dime A" from the previous album, "No estamos locos", written by Spanish flamenco-rockers Ketama, results from a marketing suggestion to include a cover of a Spanish pop hit on each disc. But although it began as a commercial idea, the timbafication process produced an unusually inspired arrangement, as it did in the case of Paulito FG's cover of the Italian rock song "Laura". In each case the cuerpo is a refreshing change of pace and leads seamlessly into the completely original Timba material that follows.

The introduction is sung a capella. The coro sings the first three lines and then Dany Lozada makes his debut as a charanguero with "y buscaré, oye mira, buscaré" [audio example 1] In the Ketama version the same coro is repeated twice each time, but CH personalizes the lyrics to the second half to add:

The words of the cuerpo, except for one passage, are faithful to the original but González' musical arrangement is quite different. When one first hears the opening coro performed by Ketama, it sounds like a completely different melody because of the absence of Sombrilla's high harmony, which comes across as the main melody in the CH version. You can sing the additional harmony along with the Ketama version and it works. Also note the distinctly flamenco tinge of "y buscaré"..

The Ketama version ends after the cuerpo -- everything from "¿pero que loco por qué?" in the Charanga Habanera version is new material.

The verses are split in clever fashion between the three singers. This album utilizes multiple lead singers more creatively than perhaps any other Timba album. Of the major Timba bands, only three (Issac, Paulito, & Manolín) are led by a singer. All the others share the lead vocals among a front line of three or even four. Of course, it's a great advantage to have lead singer-caliber coristas on hand, and perhaps the leaders fear investing too much of the group's identity in one personality, but fans have been known to complain, for example, that it's crazy for Los Van Van to have four singers because it results in two of the best singers in Cuba, Mayito and Roberto, only singing lead on a couple songs each night. But Charanga Habanera makes extensive use of its multiple lead singers within the same arrangement. (others have also done this to a lesser degree-- for example Los Van Van's "Empezó la Fiesta").

Among the great innovations of Timba is the idea of isolating the piano, bass, synth, brass, horns and the various components of the percussion section and then recombining them in a myriad of different and sometimes unexpected ways. Likewise, the standard elements of Salsa arranging -- coros, mambos, bloques, and guías -- are combined in new and creative ways. Calzado & González simply extend this approach to include "orchestrating" the singers as well. For example, check out the ingenious way the vocals are split up on the second verse. [audio example 3] Lozada punctuates Sombrilla's section with two questions, and then comments on the response before singing his piece, which Michel finishes for him.

At this point the "tremendous delirium" that's never far from the surface comes to the forefront for the first time as what was left of Ketama's original concept is left in the dust by vicious rising chromatic figure in the bass and synth. All three singers rap aggressively in a barrage of machine gun Spanish as only the Cubans can speak it. Against the chromatic bass line and the hypnotic, bluesy piano tumbao, this torrent of voices creates an effect as overtly psychedelic as the album's trippy artwork.

The next coro is based on the original song, but changes "queremos" to "tenemos" (changing "we know what we want" to "we know what we've got"). The "timba geometry" of the coros leaves each singer two holes of different sizes to fill. Michel fills the small one with one of his trademark vocalizations and the large one with a classic guía.

As with the cuerpo, the guías are divided among the three singers. Not to be outdone, Lozada fills the small hole in a different fashion and follows it with a guía that's as interesting lyrically as it is melodically (if to sing is our dream, and to dream is our song...) (Another example of why salsa doesn't work in English!)

On the third coro, the singers are silent on the small hole, spotlighting the piano tumbao's syncopated ride down the blues scale. Then they chant "mambo!" together, and after the mambo starts, Lozada interjects "chambo" alone, sustaining the varied flow of different vocal "orchestrations".

After the mambo Sombrilla gets his shot at the same coro. His treatment of the small hole is the most creative of all, making his lyrics anticipate the last part of the coro "it's (been) four years that...we('ve) know(n) what we want". The number "4" is interesting here. The album was released in '97, but the song was probably first performed in '96, eight years after the formation of the band, but four years later than '92, the year they started playing Timba.(Ironically, when a later incarnation of Charanga Habanera performed this song in Argentina in 2000, they continued to use "cuatro años" in this guía! Hearing a major change in Charanga Habanera guía in concert is only slightly less likely than hearing an altered note in a Beethoven sonata! For extensive vocal improvisations we'll have to wait until we get to the likes of Paulito FG and El Indio of Manolito y su Trabuco).

In any case, Sombrilla's last guía, a syncopated melodic gem worthy of its position of honor at the end of the arrangement, is followed by an extended flashback to the earlier psychedelia (a la "A Day in the Life") leading to a powerful final break in which four gunshot-like timbal rimshots fill the final rests of a rapid-fire rising horn line.

It's an astounding opening track, but be forewarned that for the first time, Calzado has moved on from the "front-loaded" approach of putting the strongest songs at the beginning of the album. As impressive as "No Estamos Locos" is, it's only the opening salvo in a sustained march towards an even more spectacular conclusion.